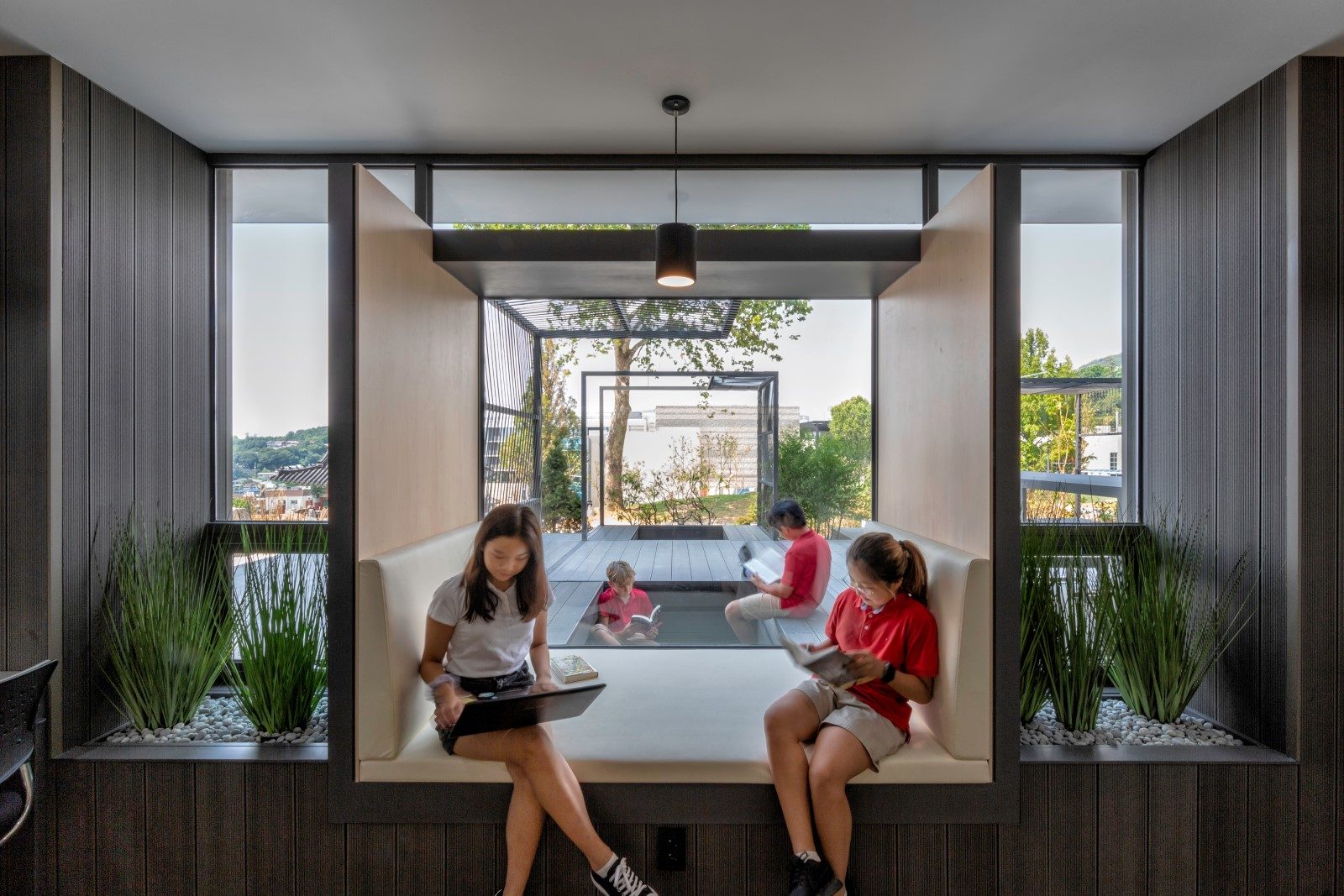 The design for this international middle school library adaptively transforms a closed-off ground floor of a 35-year-old classroom building into a light, porous, learning space inextricably tied to the larger campus. Prior to renovation, the space was first an open pilotis parking lot and last a dark, over-crowded IT office. As the given footprint was fragmented by a server room that could not be relocated, the interior design works within the constraints through a strategy of ‘buildings-within-buildings.’ From reading bunks, bay window seating, group study rooms, to a large collaborative space, a range of nested scales link individual students to the larger collective of the school. The eco-system of diverse spaces, including a dark corridor re-purposed into a ‘secret library,’ allows students to curate their own experience and discover their own way of learning. 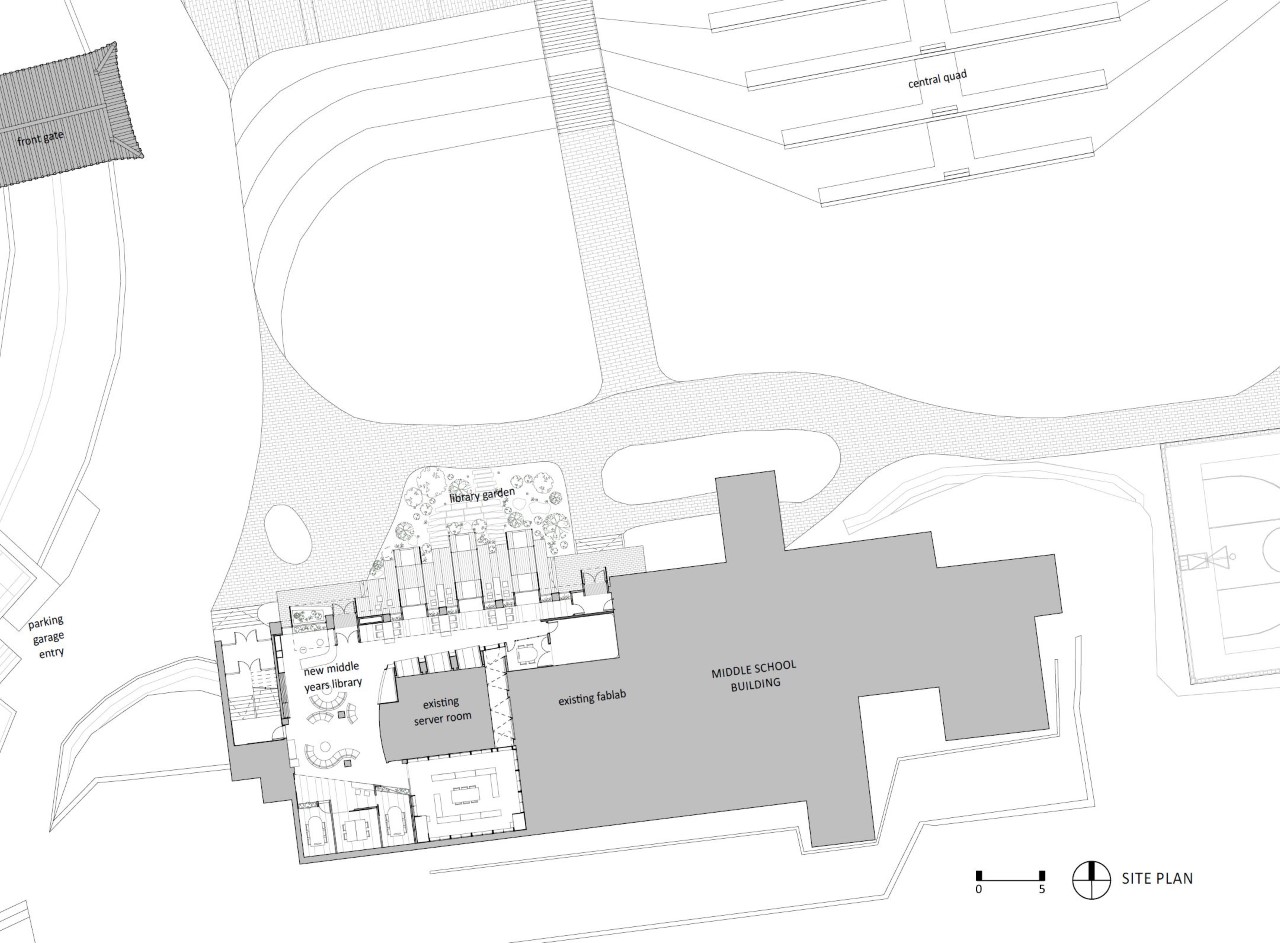 Campus Connection: The interior extends out toward the campus grounds through a library garden. 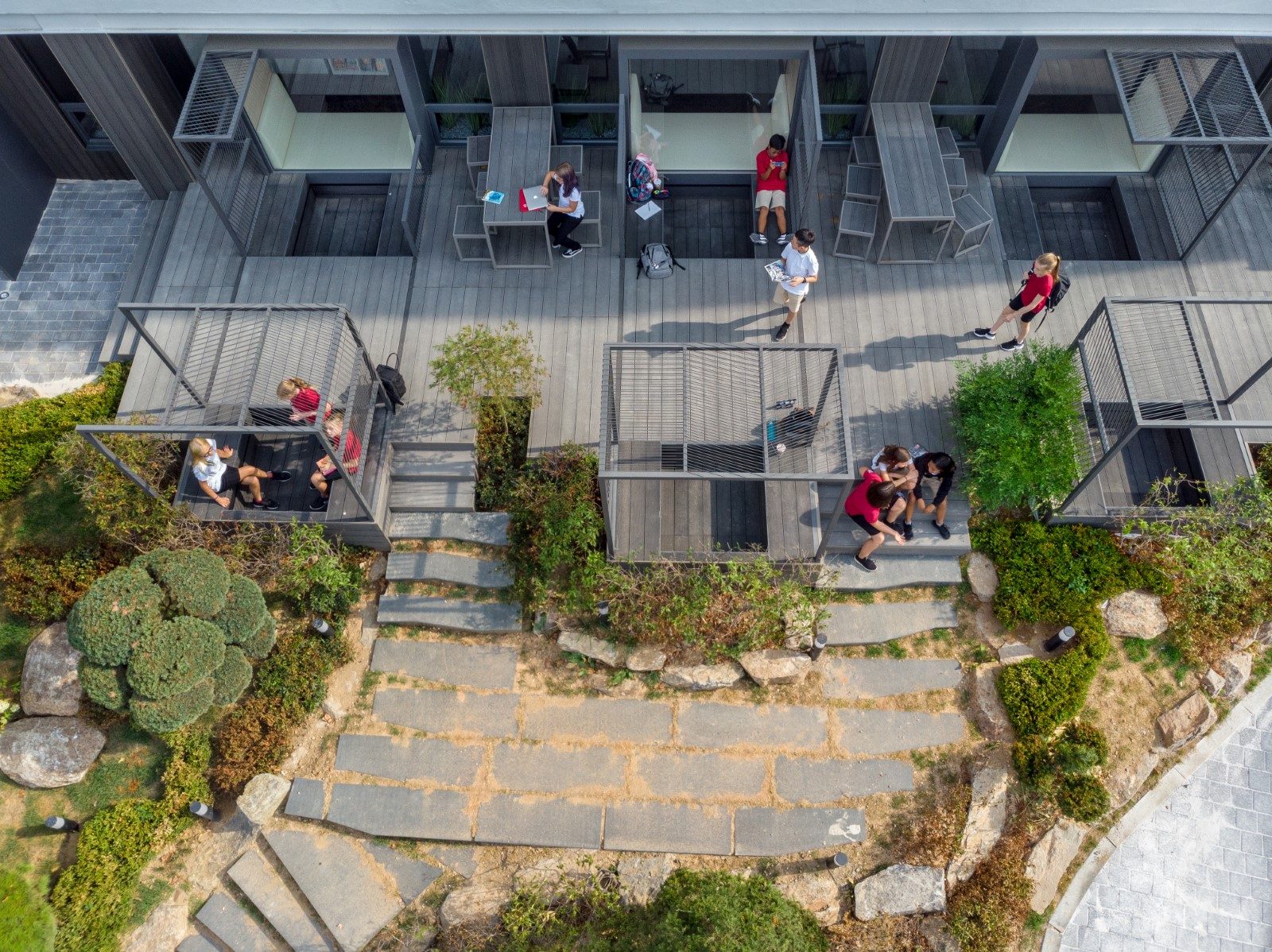 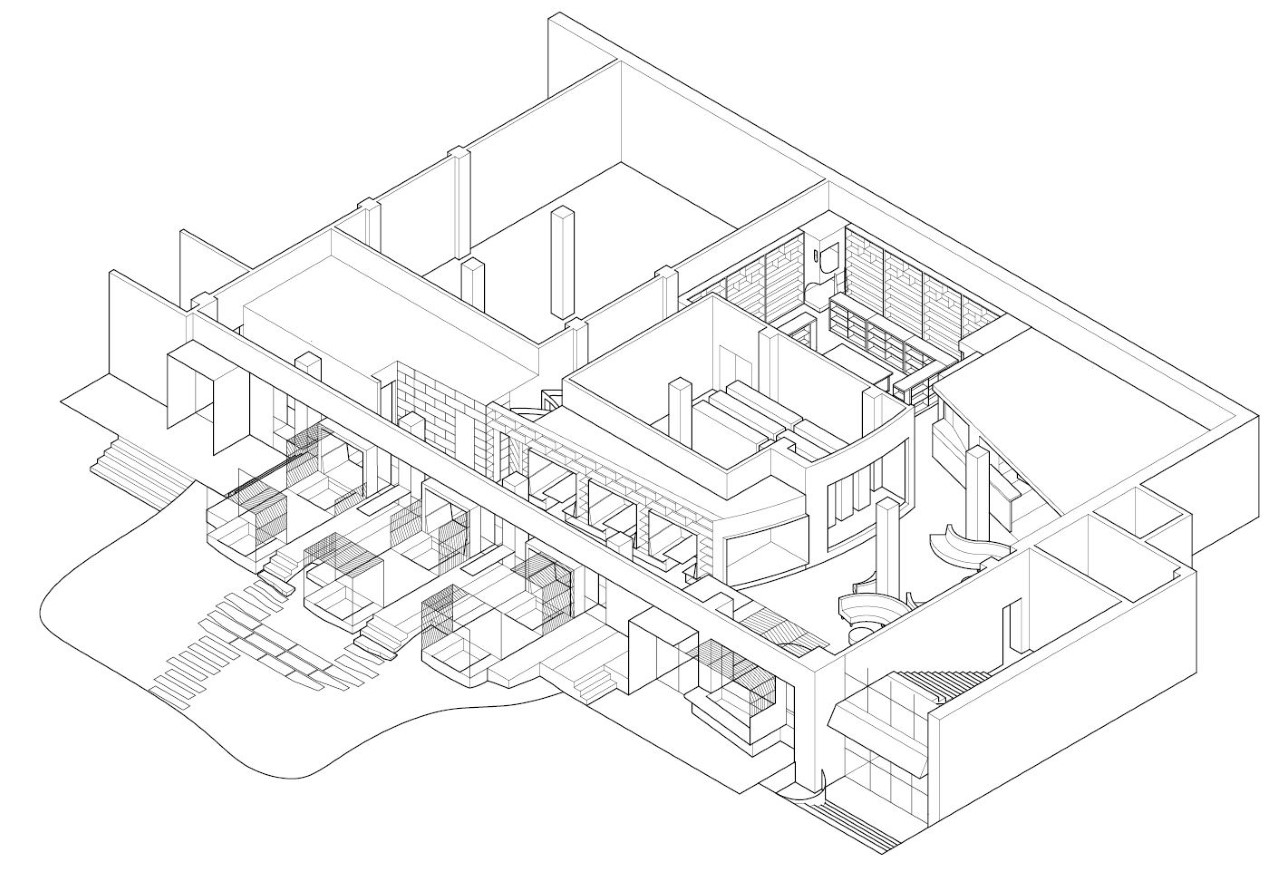 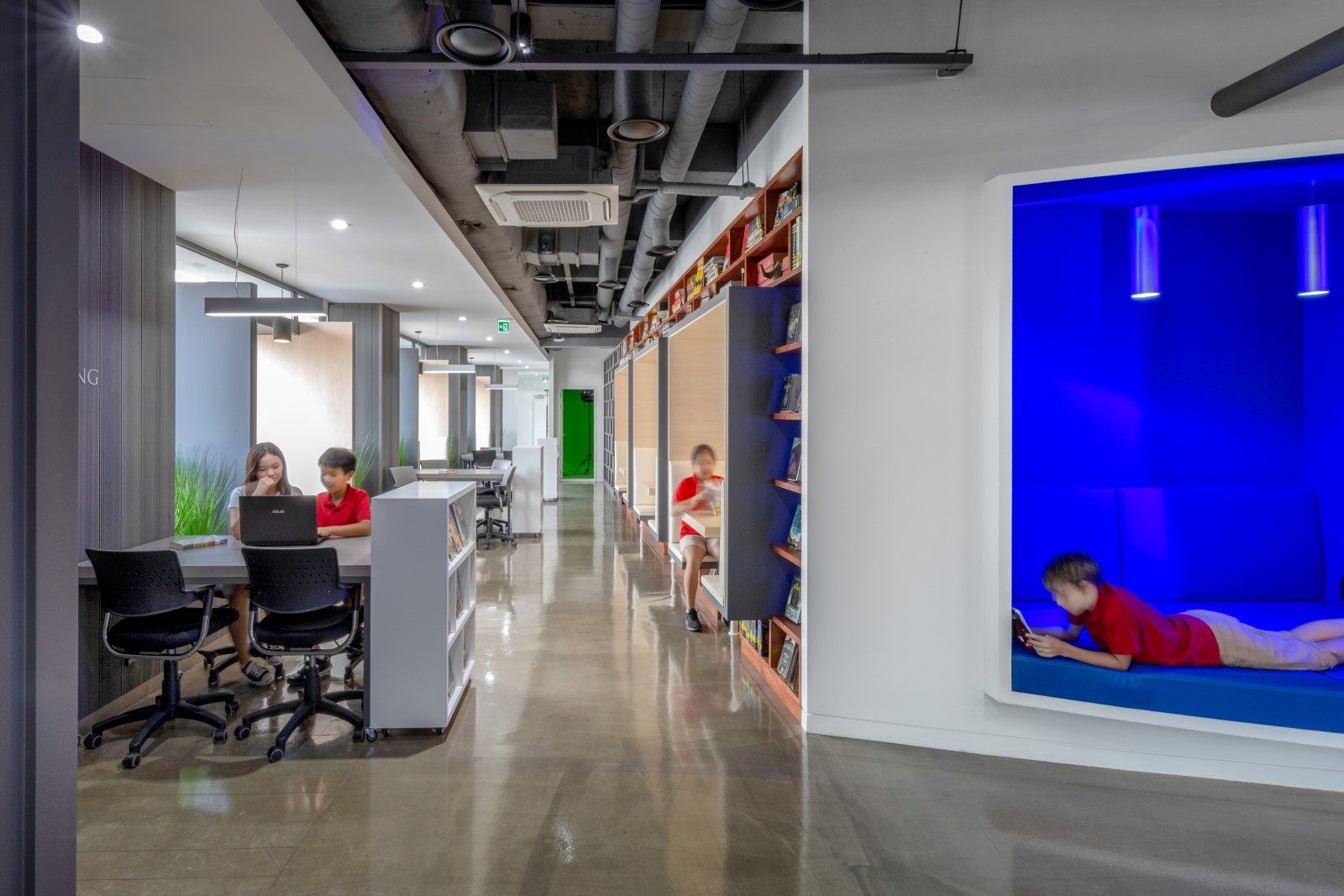 Reading Carrels: Facing the collective garden, a relatively narrow space is turned into a diverse and flexible collection of reading nooks. 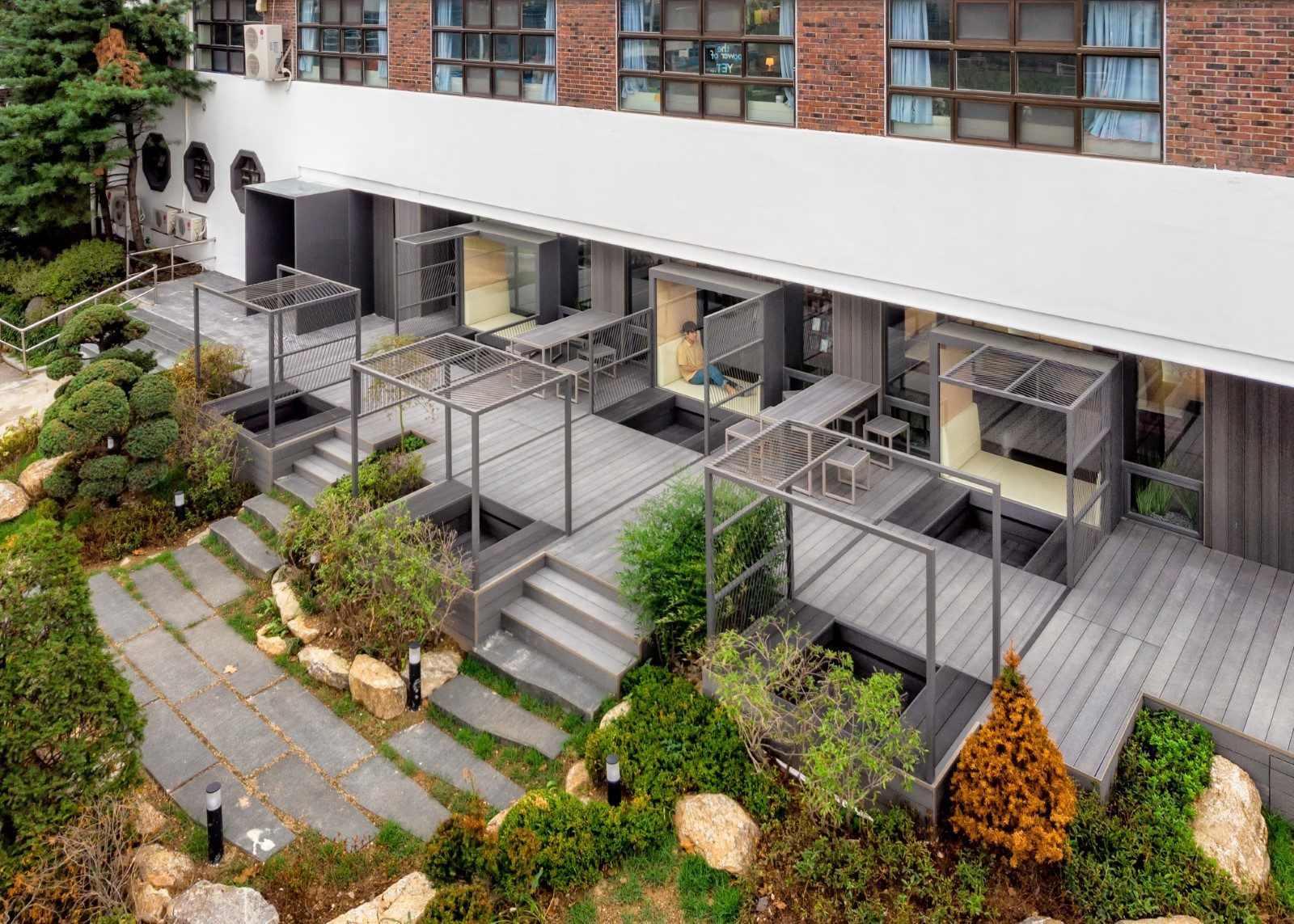 Fragments of a Whole: Interior reading carrels extend out into the garden. 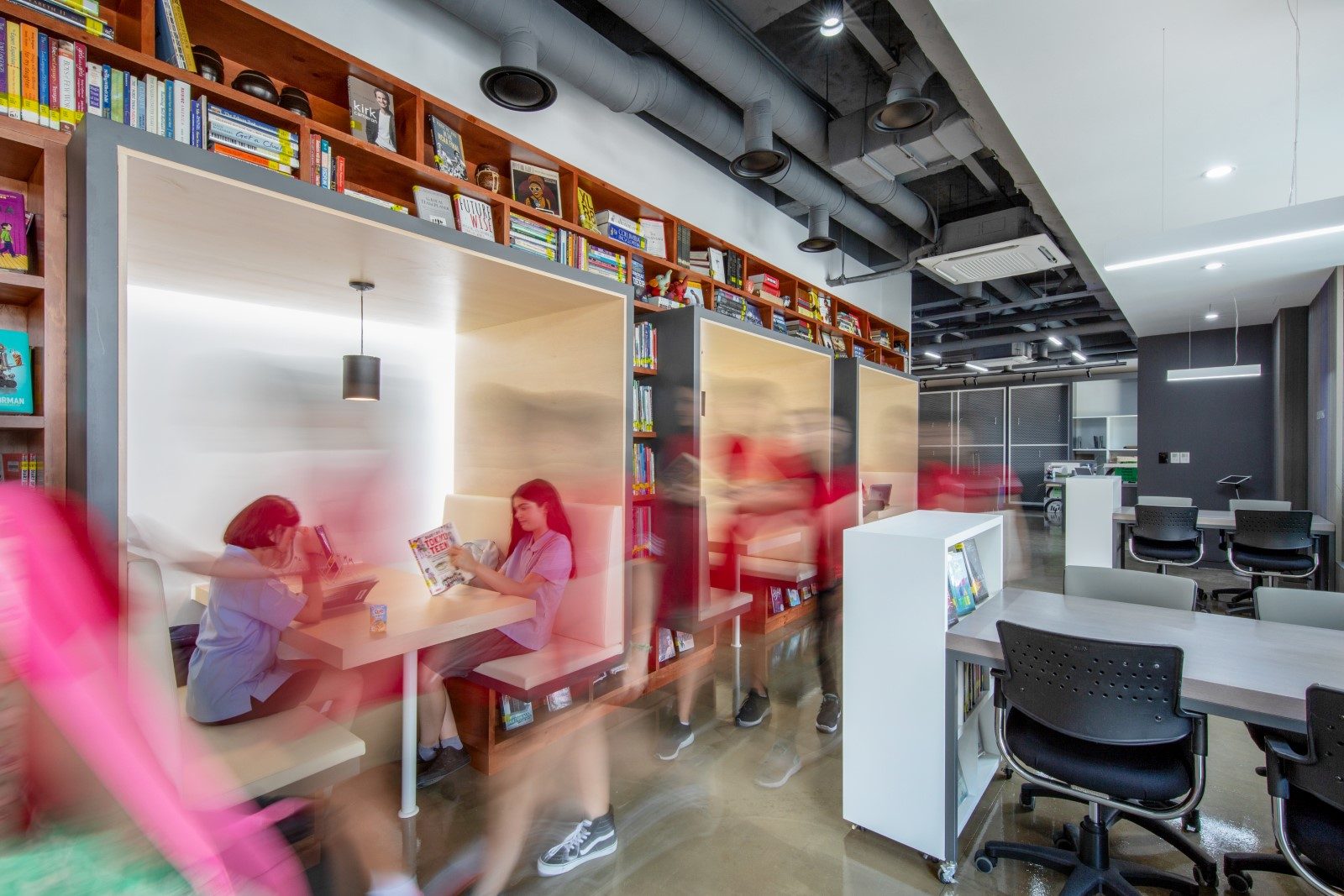 Along Together: Even as the front reading room acts as a passage, nooks allow students to claim their own space while being part of the public life of the library. 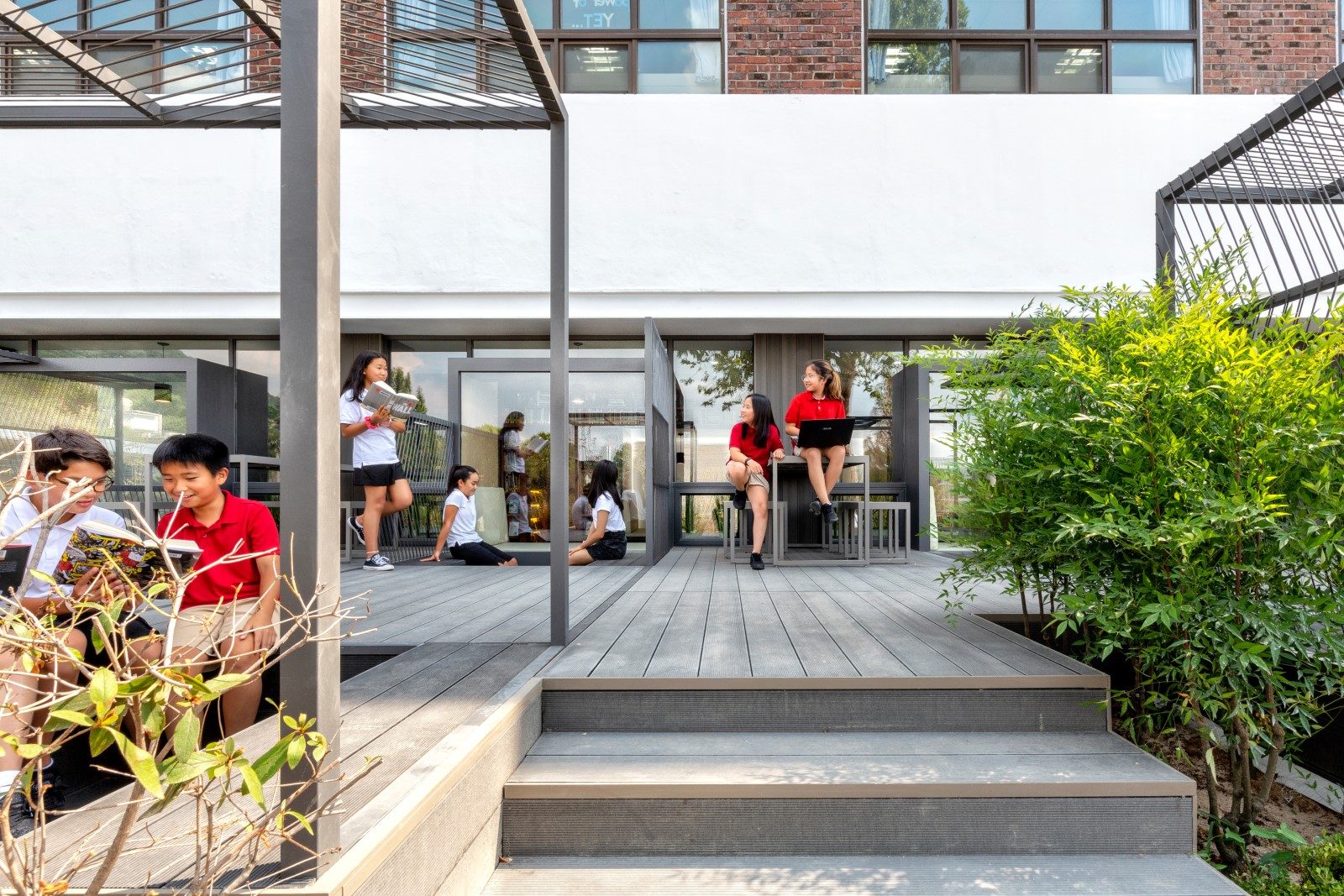 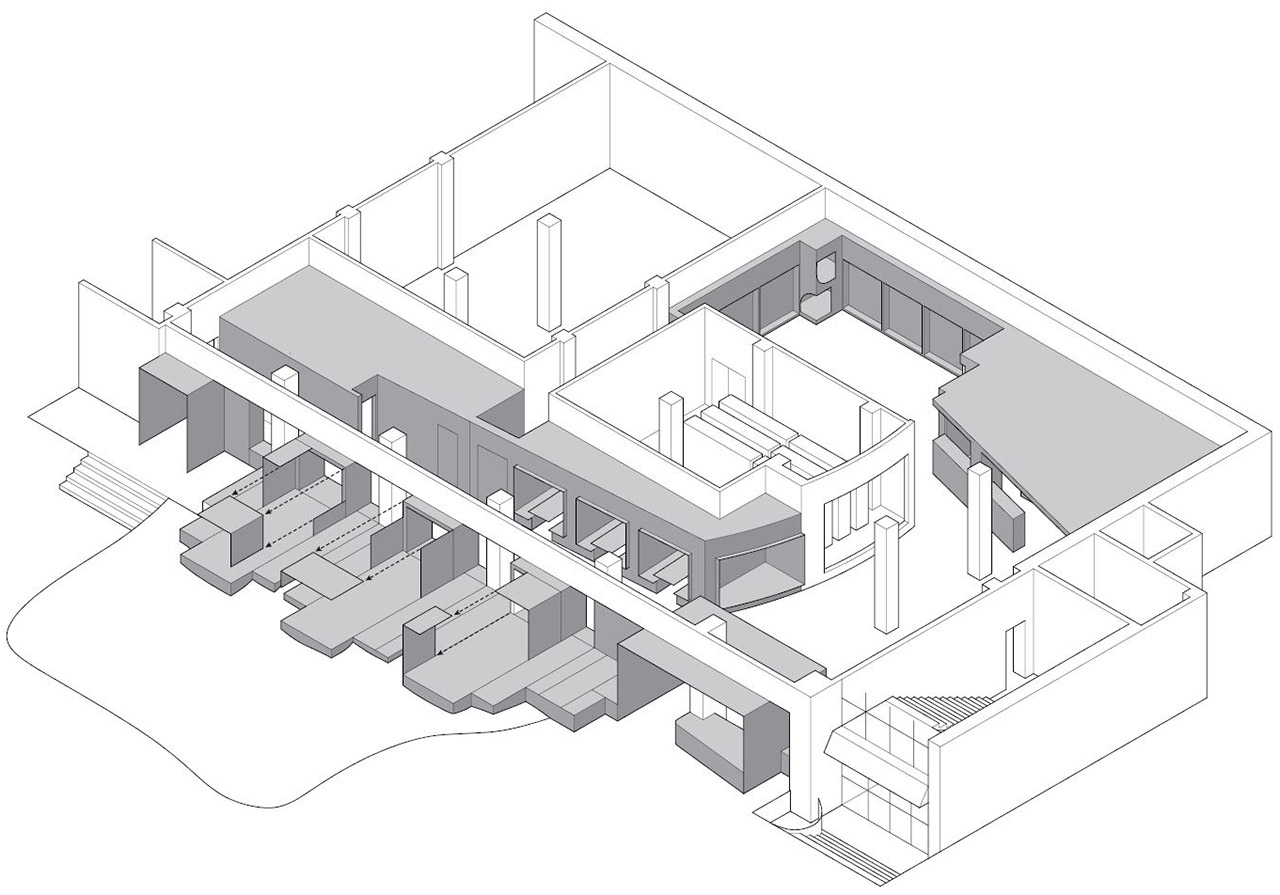 Thickened Walls: Occupiable walls create an immersive experience. Bay windows pull out into the landscape as pavilions connecting inside and outside. 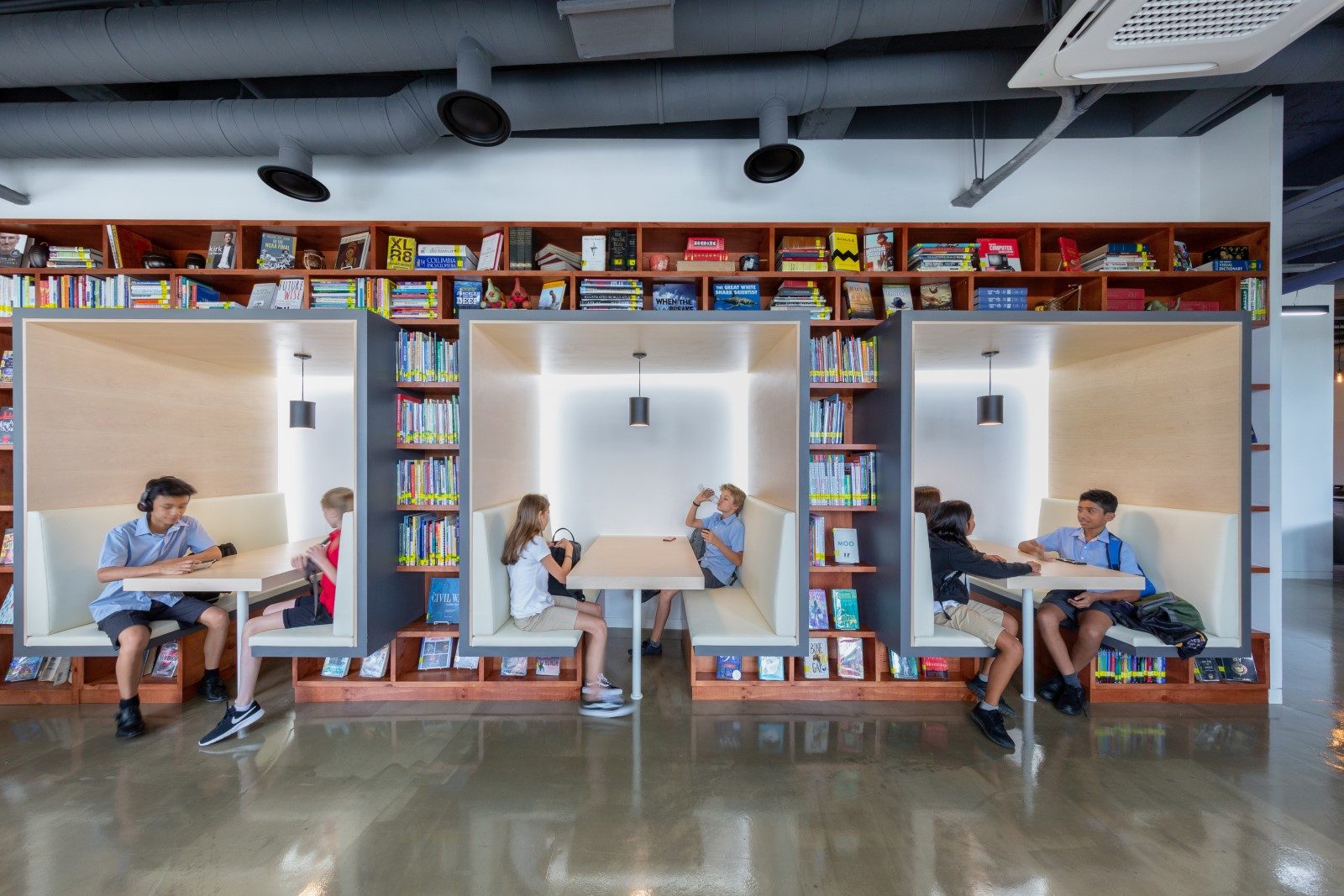 Immersed in Books: Blending domestic and institutional atmospheres, reading carrels are surrounded by a changing collection of new books.

Buildings within Buildings: Instead of viewing the interior design as a single space, nested scales between individual and community are created through expressing programs as their own unique ‘buildings.’

Floor Plan: Programs are placed around an immovable server room as ‘buildings within a building.’

Interior Urbanism:  sliding and swing doors create a shared porch-like urban space in front of the rooms while serving as an energy saving strategy for heating and cooling.

Collaboration Space: Wtihin the large multi-purpose room, salvaged semi-circular couch sections can be configured to create many seating scenarios. Various lighting allows for individual expression within the collective space. Referencing an urban plaza, meeting rooms look out into the space.

Server Room: The existing server room is exposed and turned into a futuristic blue-lit chamber. A similarly blue-lit reading nook to its left appears as if it part of this technology. Tungsten-like LED ‘idea bulbs’ hang over the collaboration space to contrast the future and past.

Greenscreen Room: As a shared space with the adjacent fablab, a greenscreen room becomes another creative asset for the library activities.

Book Stacks: Most of the bookshelves are salvaged from a previous library: arranging them circumferentially rather than in rows resulted in no loss of storage, while gaining a reading area in the center – another form of nested space.

Reading Bunks: Personal sized bunks can be a new way to share books with friends.

Secret Library: A narrow left-over corridor behind the server room is turned into a secret library accessed by a hidden book-shelf door.

Secret Library: A left-over storage corridor is repurposed into a secret comic book library. Mirrored stainless steel creates the illusion of a larger space, reflecting the half-arch lighting ribs so that they become a vault.

Sustainability, Energy and Atmosphere: As the interior only has one exposure, a wide variety of LED ‘ecosystems’ are used for specific areas. western and eastern daylight is reflected deep into the space through light colored birch plywood in the bay windows. 8 HVAC micro-zones are can be closed off and cooled/heated per demand and season. A triple micro-dust fresh air system responds to sometimes dangerous levels of airborne dust.

Entry Micro-garden: The entry vestibule and front circulation desk are expressed as an element that is ‘plugged into’ the existing building: a small interior/exterior garden brings the outside in.

The existing façade and space before renovation was closed off, dark, and partially underground. 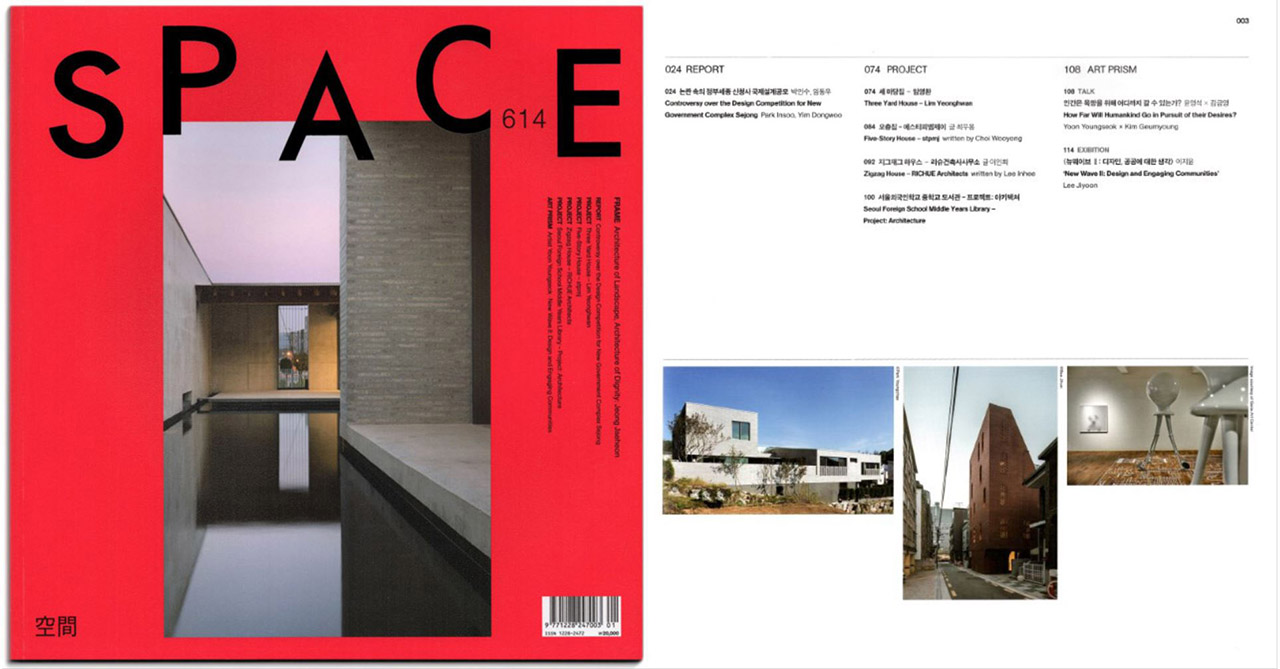 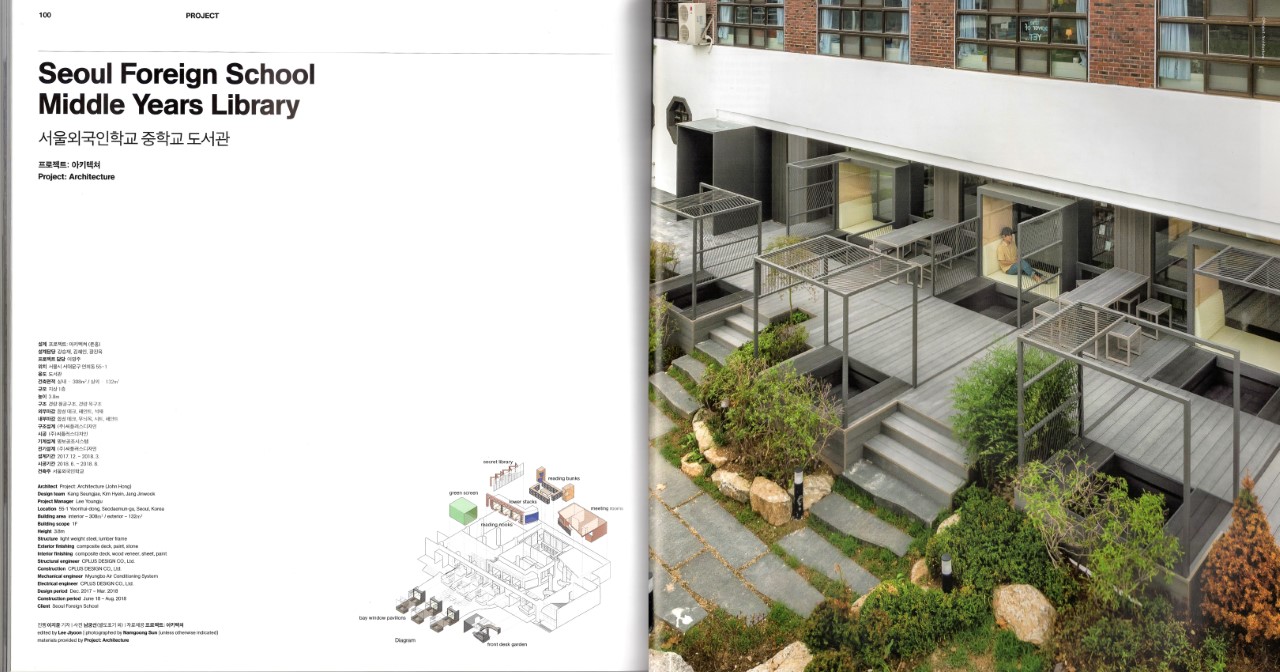 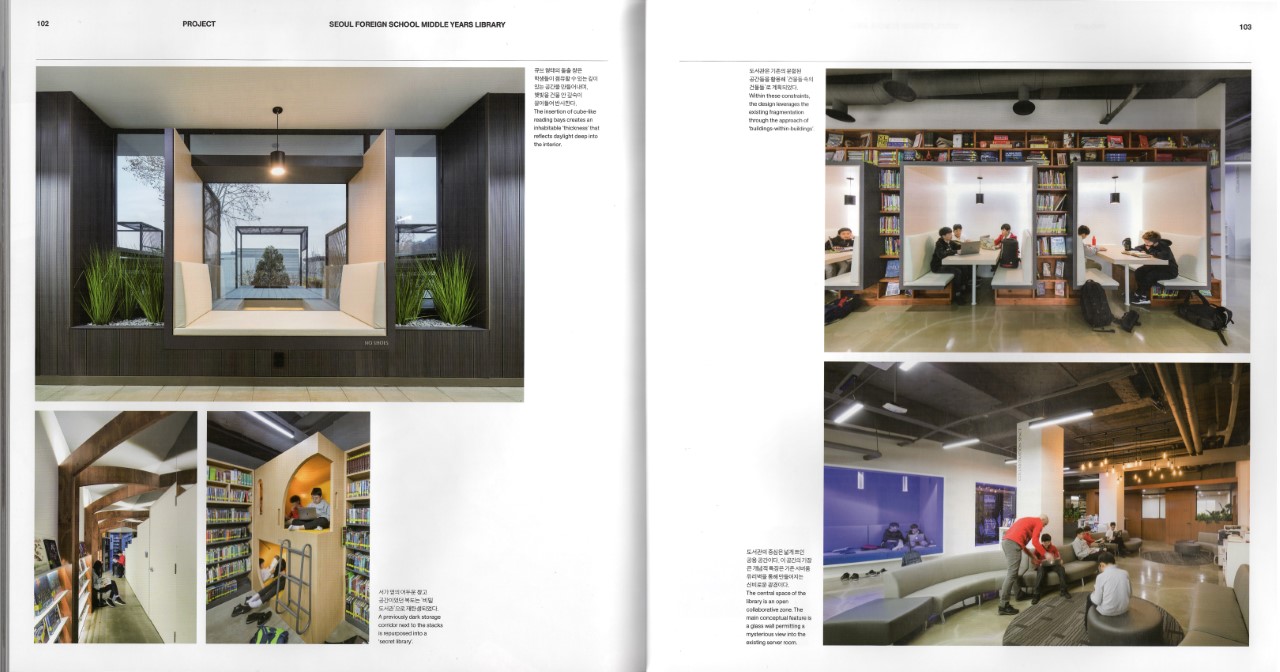 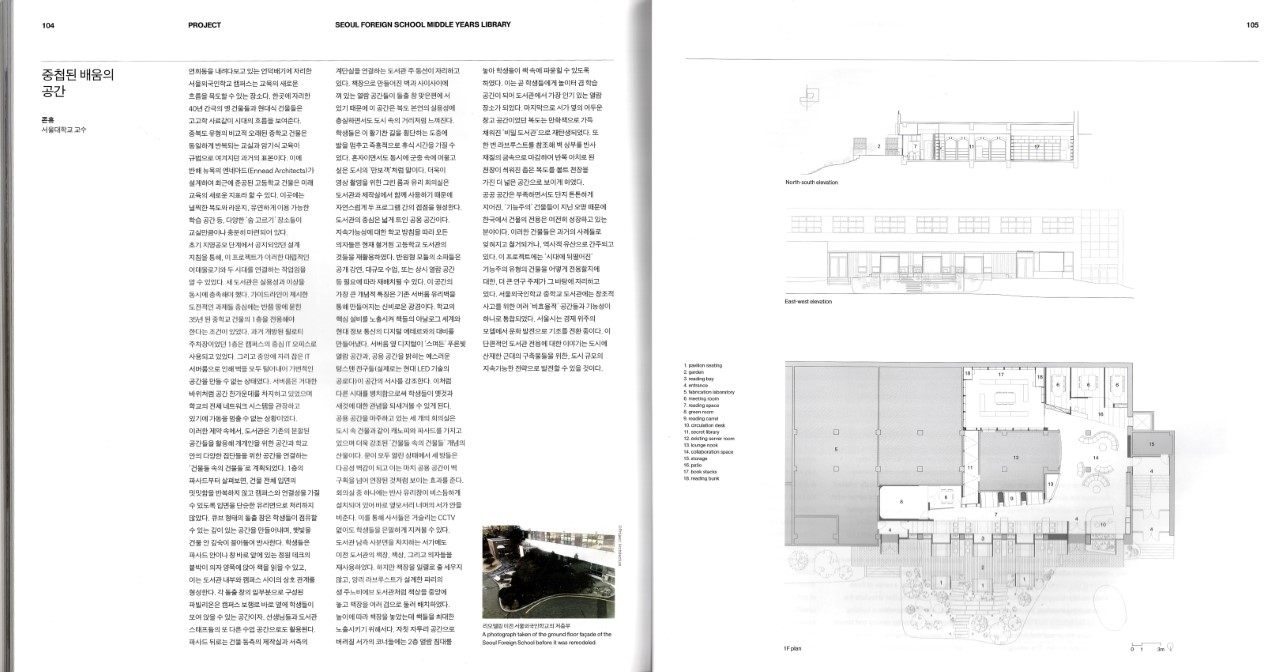 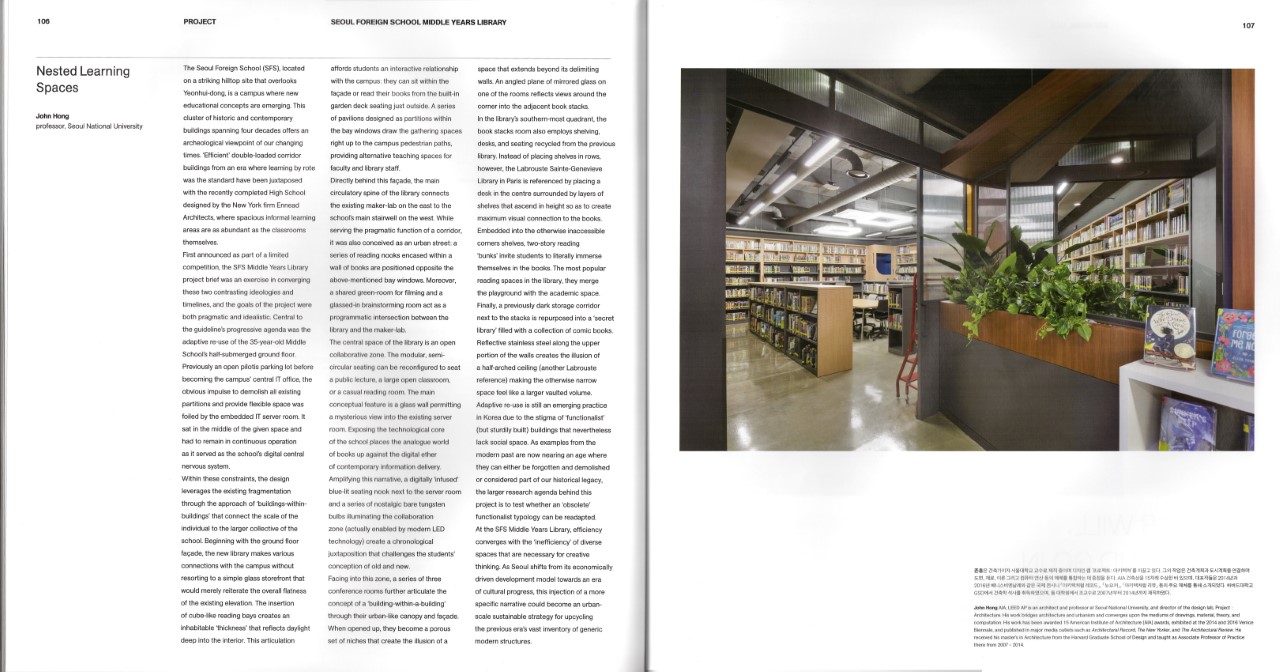 The Seoul Foreign School, located atop a striking hilltop site overlooking Yonhui-dong, is a campus where one can witness an emerging concept of education. Amongst a collection of legacy and contemporary buildings that span four decades, the various buildings are an archeology of changing times: The older double-loaded corridor typologies such as the Middle School building speak of a past when repetitive classrooms and learning by rote was the norm. Meanwhile, the just-completed High School by the New York firm Ennead embodies a future where ‘break-out’ spaces in the form of generous corridors, lounges, and informal learning areas, are as abundant as the classrooms themselves.

First announced as a limited competition, the SFS Middle Years Library project brief was an exercise in converging these two contrasting ideologies and timelines: The goals were both pragmatic and idealistic. Central to the guideline’s progressive agenda was the adaptive re-use of the 35-year-old Middle School’s half-submerged ground floor. Previously an open pilotis parking lot before becoming the campus’s central IT office, the obvious impulse to demolish all existing partitions and provide flexible space was foiled by the embedded IT server room. Like an immovable boulder, it sat in the middle of the given space and had to remain in continuous operation since it served as the school’s digital central nervous system.

Within these constraints, the design leverages the existing fragmentation through a strategy of ‘buildings-within-buildings’ that connect the scale of the individual to the larger collective of the school. Beginning with the ground floor façade, the new library makes connections to the campus without resorting to a simple glass storefront that would merely reiterate the overall flatness of the existing elevation. The insertion of cube-like reading bays creates an occupiable ‘thickness’ that reflects daylight deep into the interior. This articulation affords students an interactive relationship with the campus: They can sit within the façade or read books within the built-in garden deck seating just outside. A series of pavilions designed as fragments of the bay windows brings gathering spaces right up to the campus pedestrian paths, providing alternative teaching spaces for faculty and library staff.

Directly behind this façade, the main circulatory spine of the library connects the existing maker-lab on the east with the school’s main stair on the west. While serving its pragmatic function of corridor, it is conceived of as an urban street: A series of reading nooks encased within a wall of books are positioned opposite the above-mentioned bay windows. While students traverse this active pathway, they can slip away from the flow and take an impromptu study break like an urban ‘flaneur’ who desires to be ‘alone-together.’ Furthermore, a shared green-room for filming and a glassed-in brainstorming room act as the programmatic intersection between the library and maker-lab.

The central space of the library is an open collaborative zone. In keeping with the sustainability goals of the school, the seating was upcycled from the now demolished high-school library. Their modular, semi-circular shape allows them to be reconfigured to seat a public lecture, a large open classroom, or a casual reading room. The main conceptual feature is a glass wall with a mysterious view into the existing server room. Exposing the technological core of the school places the analog world of books up against the digital ether of contemporary information delivery. Amplifying this narrative, a digitally ‘infused’ blue-lit seating nook next the server room and a series of nostalgic bare tungsten bulbs illuminating the collaboration zone (actually made through modern LED technology) create a chronological juxtaposition to challenge the students’ conception of old and new.

Facing into this zone, a series of three conference rooms further articulate the concept of ‘building-within-building’ through their urban-like canopy and ‘façade.’ When opened up, they become a porous set of niches that create the illusion that the collaboration zone extends beyond its delimiting walls. An angled plane of mirrored glass on one of the rooms reflects views around the corner into the adjacent book stacks so that the librarian can surreptitiously watch over the students without resorting to intrusive CCTV cameras.

At the library’s southern-most quadrant, the book stacks room also employs shelving, desks, and seating recycled from the previous library. Instead of placing shelves in rows, however, the Labrouste Sainte-Genevieve Library in Paris is referenced by placing a desk in the center surrounded by layers of shelves that ascend in height so as to create maximum visual connection to the books. Embedded into the otherwise inaccessible corners shelves, 2-story reading ‘bunks’ invite students to literally immerse themselves in the books. The most popular reading spaces in the library, they merge the playground into the academic space. Finally, a previously dark storage corridor next to the stacks is repurposed into a ‘secret library’ filled with a collection of comic books. Reflective stainless steel on the upper portion of the walls creates the illusion of a half-arched ceiling (another Labrouste reference) making the otherwise narrow space feel like a larger vaulted volume.

Adaptive re-use is still an emerging practice in Korea due to the stigma of ‘functionalist’ (but sturdily built) buildings that nevertheless lack social space. As examples from the modern past are now nearing an age where they can either be forgotten and demolished or considered part of our historical legacy, the larger research agenda behind this project is to test whether an ‘obsolete’ functionalist typology can be readapted. At the SFS Middle Years Library, efficiency is converged with the ‘inefficiency’ of diverse spaces that are necessary for creating thinking. As Seoul shifts from its economically driven development model toward an era of cultural progress, this injection of specific narrative can become an urban-scale sustainable strategy for upcycling the previous era’s vast inventory of generic modern structures.

Located on a strictly preserved wooded area, this project converges with the site and environment through a zero-energy strategy. While the massing adheres to tight setback restrictions, the roof breaks free of the house’s orthogonal geometry to…

This recording studio for innovative recording engineer and musician Pete Weiss, solves issues of acoustics while engaging the site and context. An extension of an existing century-old barn, the new structure utilizes a variation on the pitched roofs…

As a prototype building that demonstrates how infrastructure can be salvaged and reused, the structural system for this house is comprised of steel and concrete discarded from Boston’s Big Dig. Utilizing over 600,000 pounds of…