There are powerful parallels between the Château de Chambord and Sir Thomas More’s Utopia: both are unfinished allegorical works spanning past and future. What explicitly defines utopia is its radical relationship to its surrounds. More’s Utopia was famously (and incorrectly) depicted in Ambrosius Holbein’s 1518 woodcut as an island, when in fact it appeared in More’s original text as a peninsula connected to the European mainland. Utopia’s tethered condition, in dialogue with its socio-political context, conceptually binds it to the unfinished project of Chambord. Even as the château itself was conceived of as a strong figure, each shift in royal ownership marked a new conception of its exterior, and thus a new shift in defining what is utopia. Spanning from the 16thc. to current times, Chambord’s grounds have constantly evolved and devolved, from a naturalistic to highly controlled, from productive to decorative, from closed to open.

Like reconstructing More’s peninsula in reverse, our proposal for Chambord’s future is a simultaneous overlay of the past and present. Extending the diverse programming that marked the important shift of the château from private to public control, we imagine the extension and intensification of year-round activities, tightly integrated into the site and building. Reinterpreting and occupying the historical lines of the previous eras, the future of the site gains its flexible multi-use through the daily practice of the palimpsest. Finally, the historical confusion of what is the formal ‘front’ of the château is re-read as a positive ambiguity: Four programmatic fronts emanate from the château’s geometry, forming quadrants based on Trade, Production, Performance, and Nature. These regions work as a whole to posit utopia as a contingent and constantly evolving concept.

CONTINGENT UTOPIA
Contrary to popular belief, Sir Thomas More’s original vision of Utopia was a peninsula rather than an island. Recovering these beginnings we reconceive the walled-off Chambord Chateau as a contingent, unfinished project. 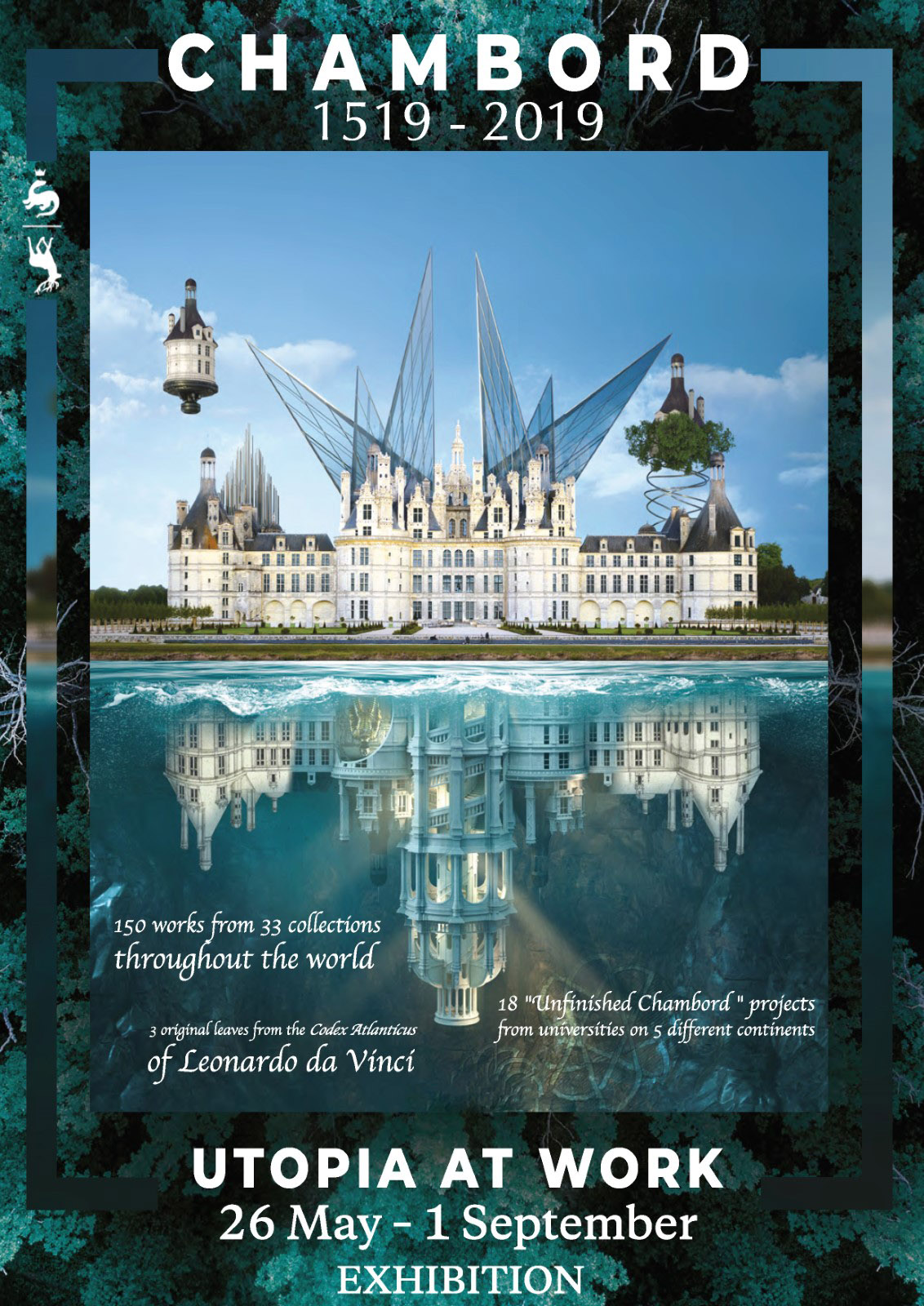 INTERNATIONAL EXHIBITION
18 Universities were selected from 5 continents to exhibit their research in the historical setting of the Chambord Château. 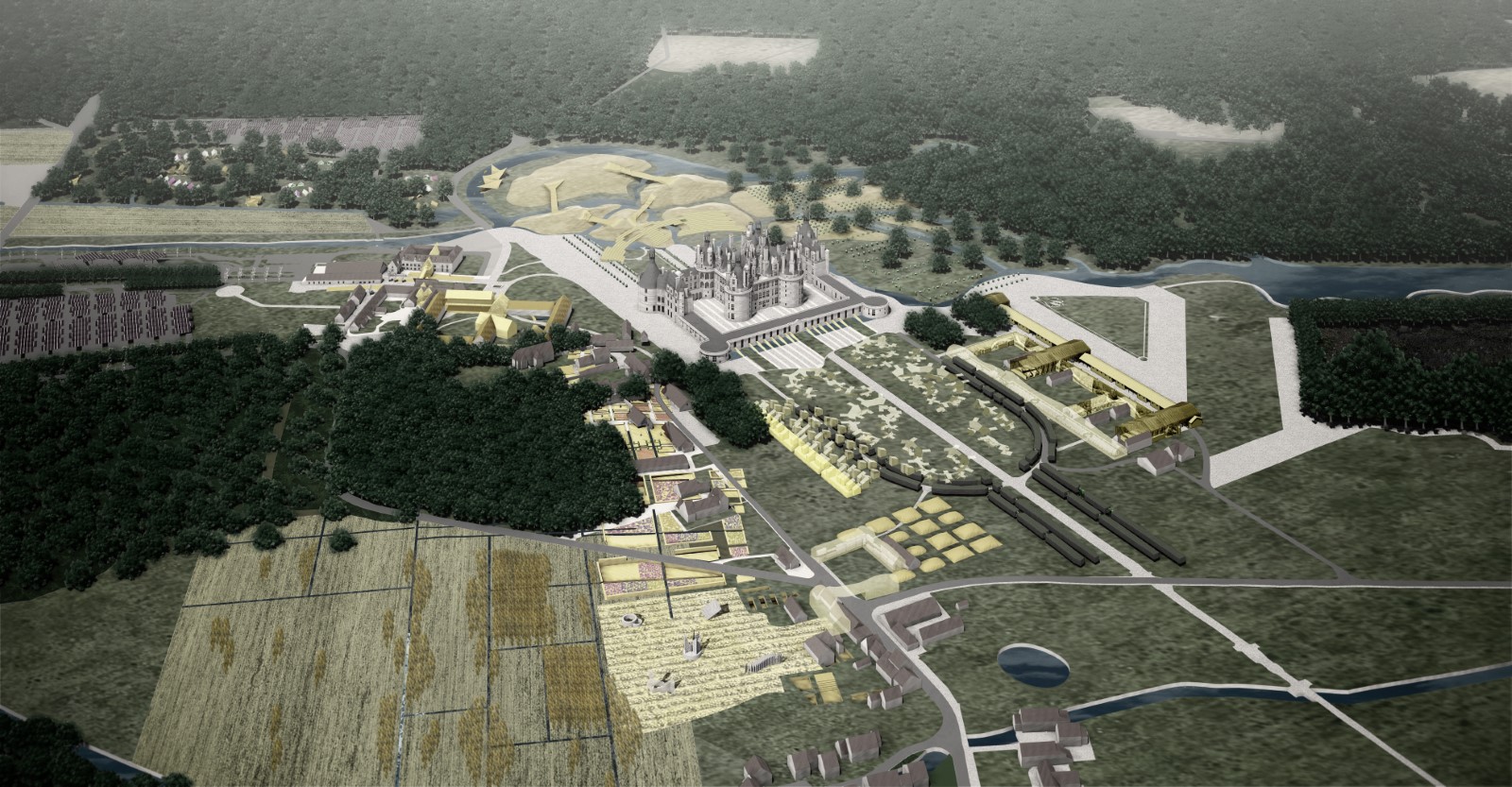 PAST, PRESENT, AND FUTURE
While preserving the château, the surrounding landscape becomes a historical narrative of its previous five centuries – a new ground to imagine future uses. 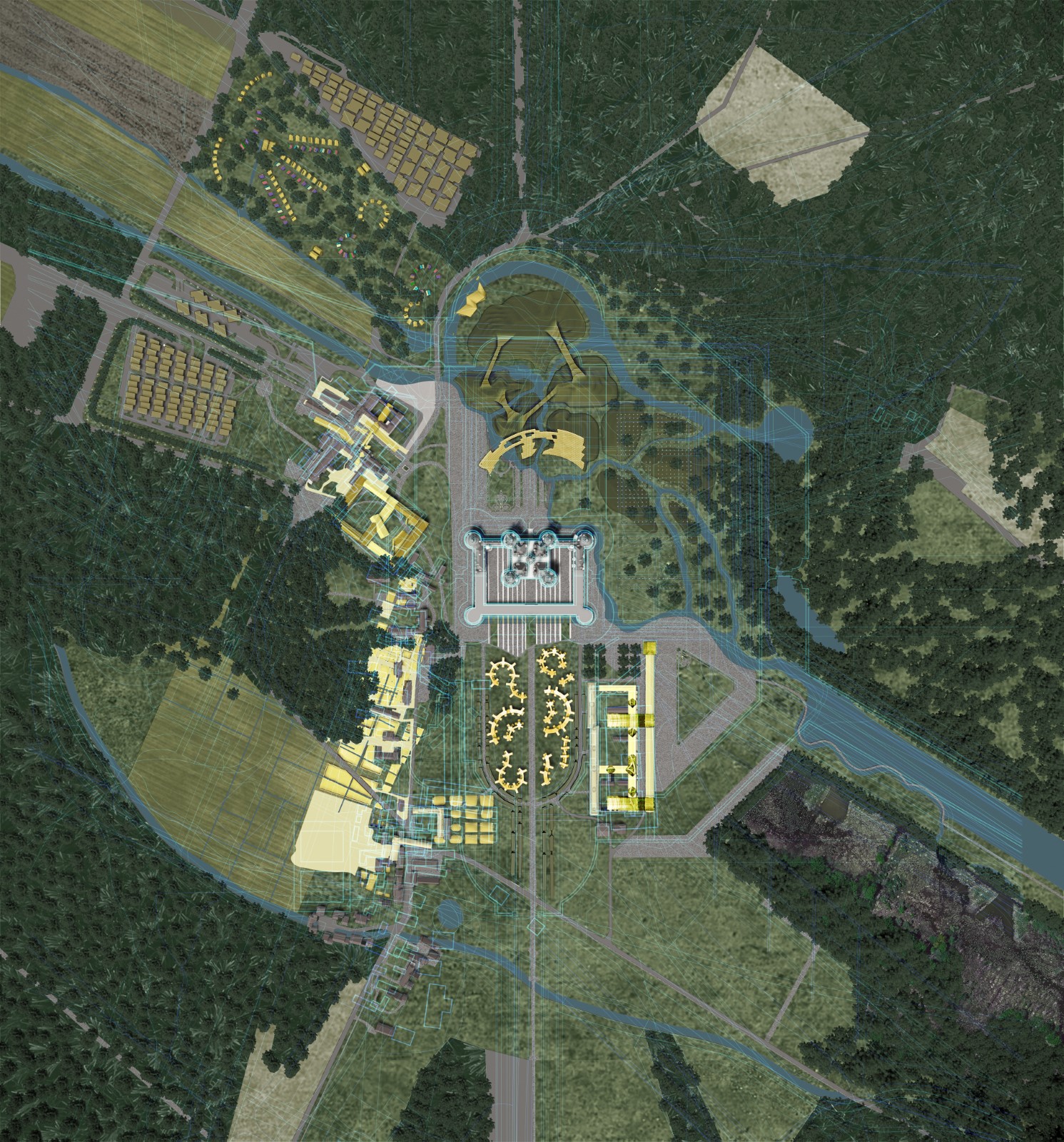 SITEPLAN AS PALIMPSEST
Even as the château itself was conceived of as a singular figure, each shift in royal ownership recreated its surrounds – each time redefining utopia. Spanning from the 16thc to current times, Chambord’s grounds have constantly evolved and devolved, from a naturalistic to highly controlled, from productive to decorative, from closed to open. 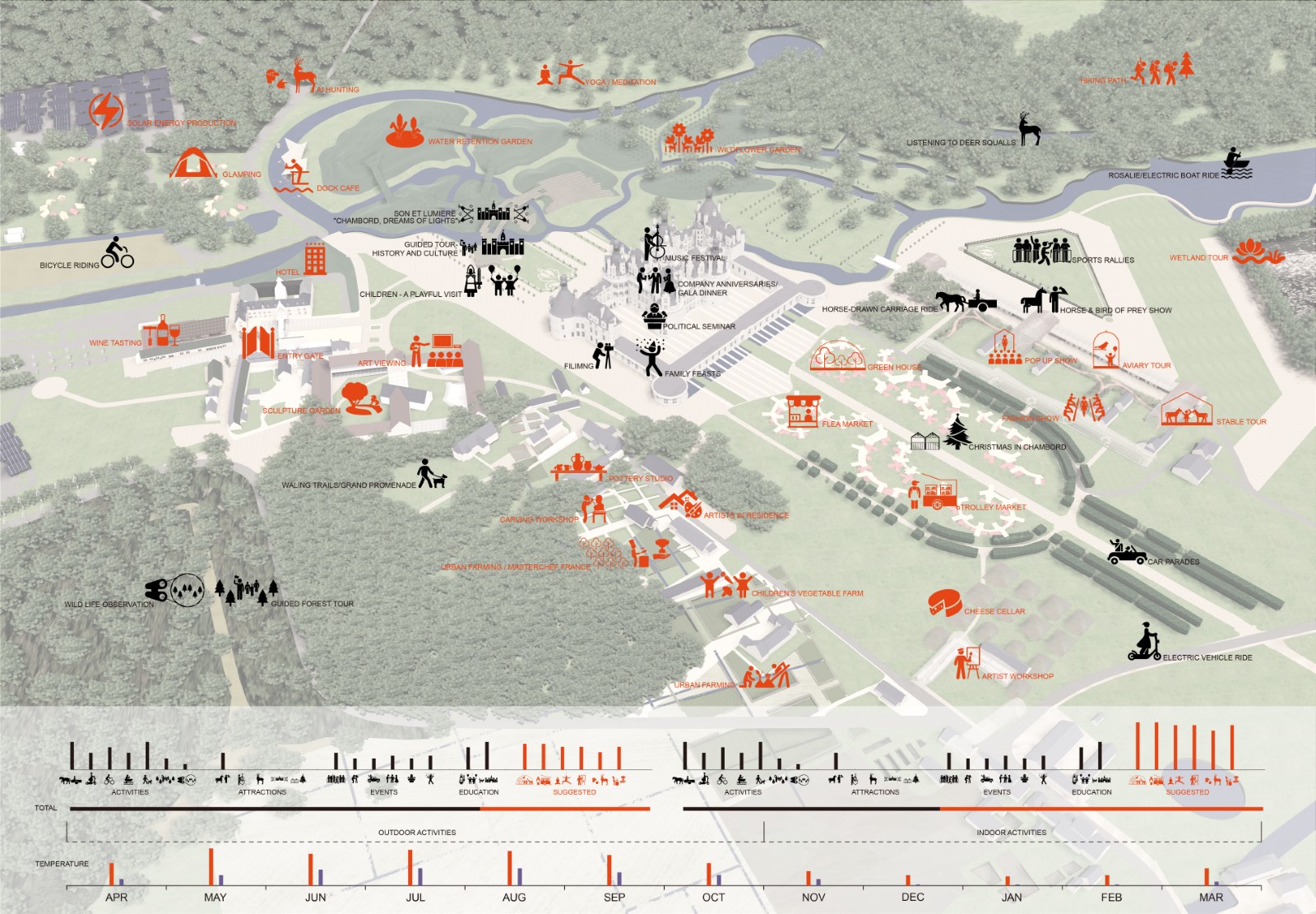 PALIMPSEST PROGRAMMING
We imagined an intensification of year-round activities. The western quadrant is reconceived as a production-based zone where historical maps reveal lines of farming, workshops, and dwellings. The northern quadrant converges informal historical landscapes into a new performance zone. By diverting the waterways to their previous natural form, the area also works as a flood control zone. In the eastern quadrant, a restored wetlands becomes a ‘post-human’ version of utopia. Here we re-introduce centuries-old ‘hunting’ programs, this time with AI avatars as ghosts of the past. Finally, the large northern quadrant is reinforced with moveable pavilions that can extend the existing flea market. Most importantly, the intersections between the quadrants allow for multivalent synergy. For instance, urban farming occurs at the intersection of production and trade. At the seam between performance and production, a massive solar array shades the parking area and an allée of wind turbines offer a monumental entry experience. Energy autonomy for Chambord reflects the idea of utopian autonomy. Finally, at the intersection of  Nature and Performance, a stable, aviary, and garden hosts small gatherings. 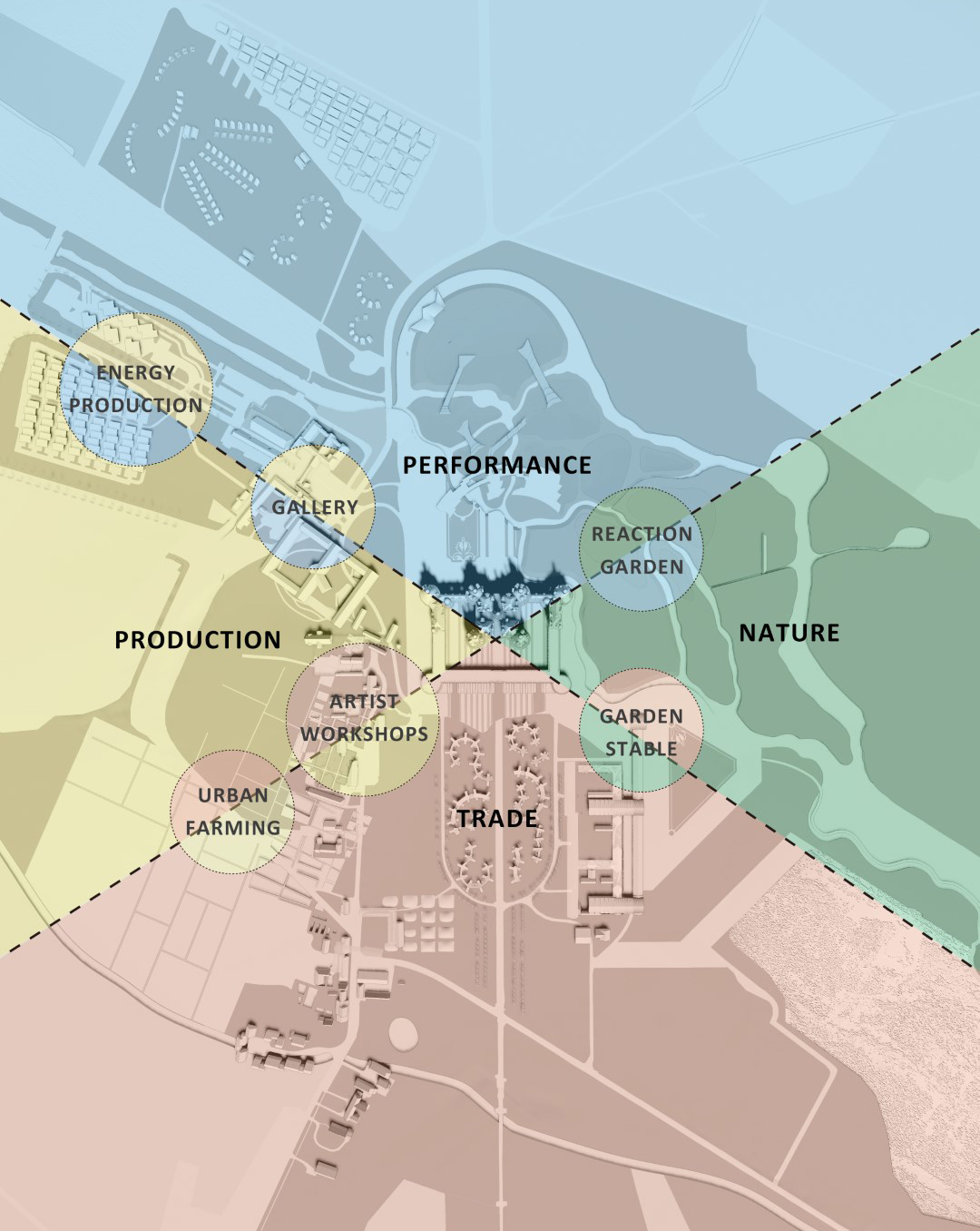 FOUR FRONTS
Throughout the château’s existence, confusion of what is its formal ‘front’ can be traced within five centuries of historical drawings. The condition is further exacerbated by a recently built parking area on the northeast ‘side.’ Instead of privileging one period over another, we instead re-read their lack of clarity as a positive launching point. Four programmatic fronts emanate from the château’s geometry, forming quadrants based on Trade, Production, Performance, and Nature. 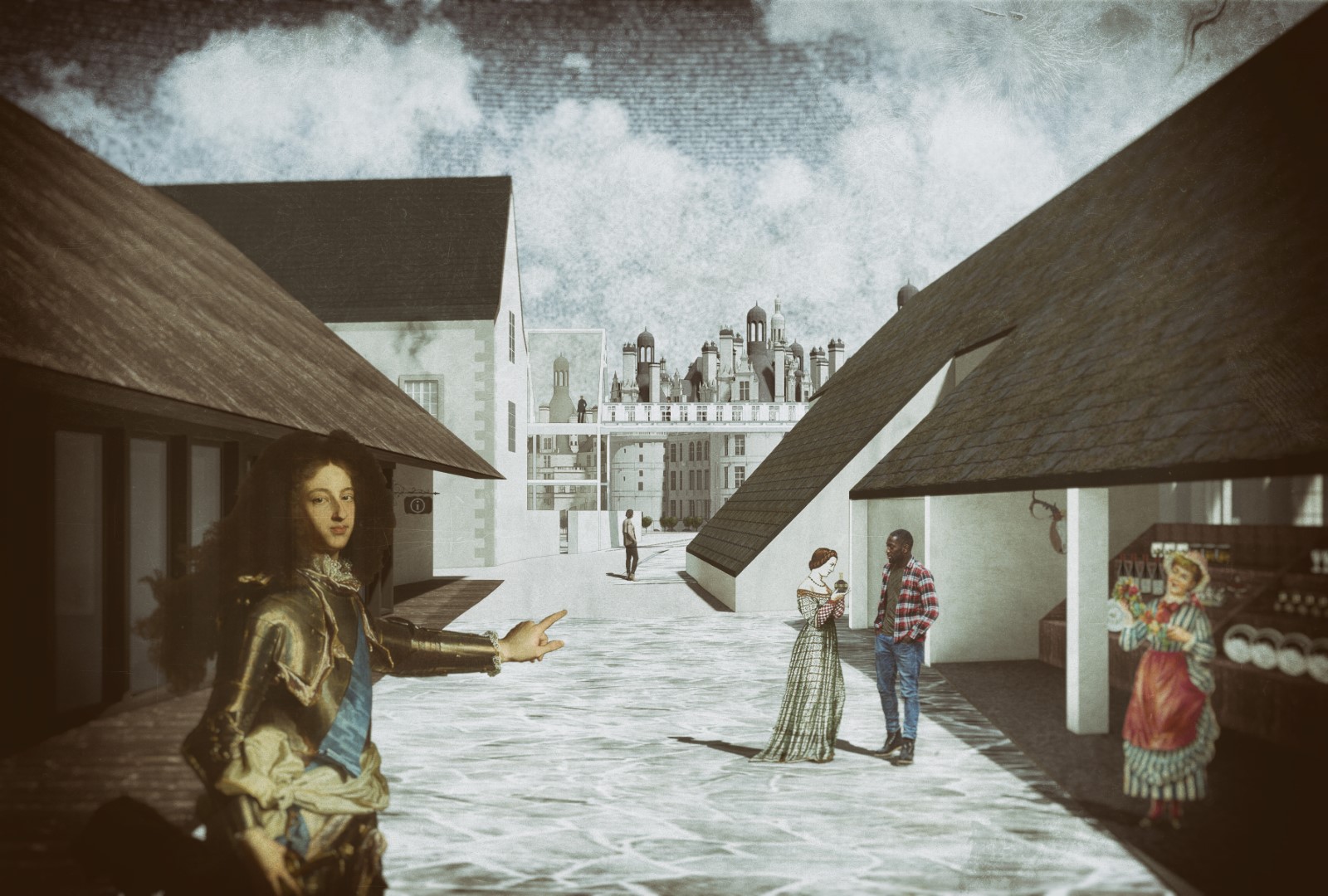 ENTRY VILLAGE
The density of the existing historical village is amplified by the restoration of demolished structures creating pedestrian scale approach from the parking lot. 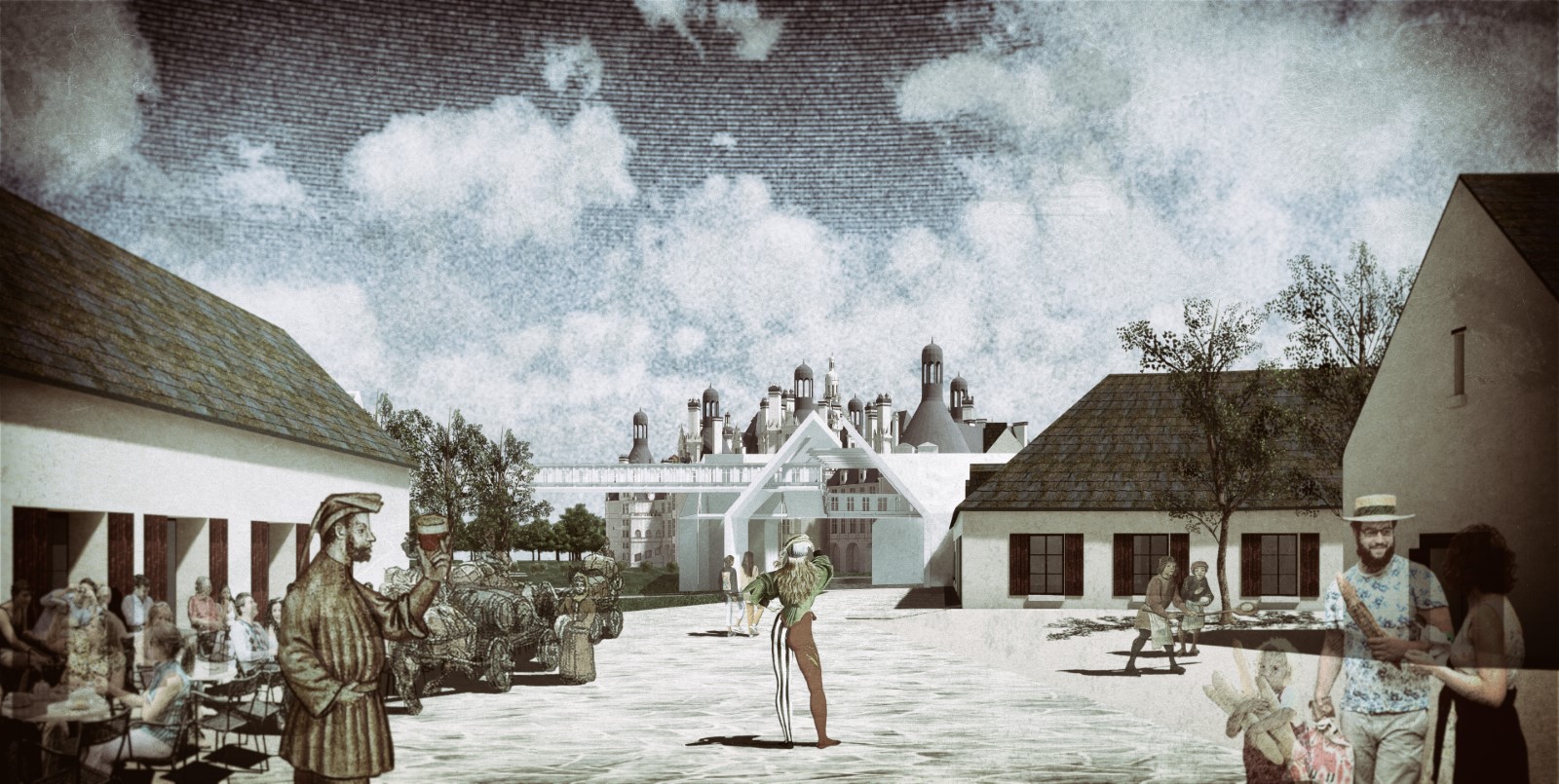 ENTRY PLAZA
A final courtyard space frames a fragmented view of the château roofscape so that the singular building appears as a distant assembly of many buildings.

PRODUCTION × PERFORMANCE QUADRANTS
The intersection of 2 quadrants contains a solar panel array covering the parking area and an assembly of village-like buildings built on ancient foundations. New programs include a visitor center, galleries for the local artists-in-residence, restaurants, and hotel.

GARDEN MARKET
The large and difficult to program ‘front’ garden is given multiple uses with modular stalls that fold back into the footprint of a previously existing structure.

EVENT SPACE
Pop-up events are made possible through the transformable greenhouse structures.

INTERSECTING STRUCTURES
Two historical structures, the garden stable and aviary, are simultaneously brought back into the present day to allow for new interactions.

PRODUCTION × PERFORMANCE QUADRANTS
Botanical gardens, the existing stable, and an aviary create a transitional zone between the market and the natural surrounds.

EXCAVATED HISTORICAL GROUND
The previous traces of an agricultural village become gardens and buildings for production and exhibition.

BOATING AND GLAMPING
Adjacent to the existing parking area, visitors can experience a portion of the restored waterways through rented canoes and camping facilities

FORMAL AND INFORMAL LANDSCAPES
Historical landscapes and the lightweight interventions converge into a new performance zone where existing programs like the Son et Lumière light-projecting festival can be performed within a stunning context. By diverting the waterways to its previous natural form, the area also works as a flood control zone.

NATURE AND PERFORMANCE QUADRANTS
The now channelized waterways that mitigated flooding are brought back as recreational and performance landscapes. Selective zones can only be occupied by ‘view only’ to reinstate historical habitats.

SECTION OBLIQUE
The château is essentially transformed not through a renovation of the historically preserved building itself, but through redefining its context

P : A TEAM PRESENTATION
All 22 global universities participated in an on-site symposium

The design for this international middle school library adaptively transforms a closed-off ground floor of a 35-year-old classroom building into a light, porous, learning space inextricably tied to the larger campus. As the given footprint was fragmented by a server room…