Like many of the ‘ethnic’ areas of our cities, Manhattan’s Koreatown (located between 28th and 34th Streets east of Broadway) is a place where a particular group has inscribed its cultural practice onto an inherited urban fabric, putting what is ‘marginal’ and what is mainstream in dialogue. when a section of the city is too far transformed – when the seam between a new cultural practice and the original fabric becomes apparent – it is perceived as illegitimate, cast out, ghettoized. The task of a translating methodology is to place these cultural transaction sin a horizontal, non-hierarchical relationship, where the new and the original undergo a reciprocating, renewing, as well as maturing transformation.

As an intervention into the notion of a discrete, hegemonic culture, such spaces of translation throw the existing spatial order into question. Sidewalks, storefronts, and elevator entry halls coalesce into a kind of topography. New partitions between street-level shops blur the difference between one building and the next, contradicting the texture of the existing buildings so that this other fine grain begins to reverberate at its own dense scale. The ground is rarely blank.

The user of the city, typically assumed to be a passive consumer, actively participates in a relational rather than segregational urbanity. During the day, the sidewalk becomes a fluctuating realm of transactions and conversations, tracing trajectories throughout the city. At night, nodes of activity gravitate around elevator entries still propped open, leading to billiard halls or singing rooms inserted into the third and fourth floors. Piled on top of the same footprint, retail space, a library, a pool hall, a beauty shop/prostitution house, and an acupuncture clinic cannot be moralistically administered and separated. Rather, they are suspended in a social matrix. The owner of the pool hall receives financial help from the prostitution house, the library goes into business with the pool hall. Before 5 A.M., delivery trucks begin to fill the streets with fabrics or other raw materials for the sweatshops hidden in the upper-story lofts.

The reading fo Koreatown is also the writing of new dialogical texts to remeasure Manhattan. A survey of a series of adjacent buildings from 8 to 22 West 32nd Street begins to examine the elements and shards of this faceted narrative. 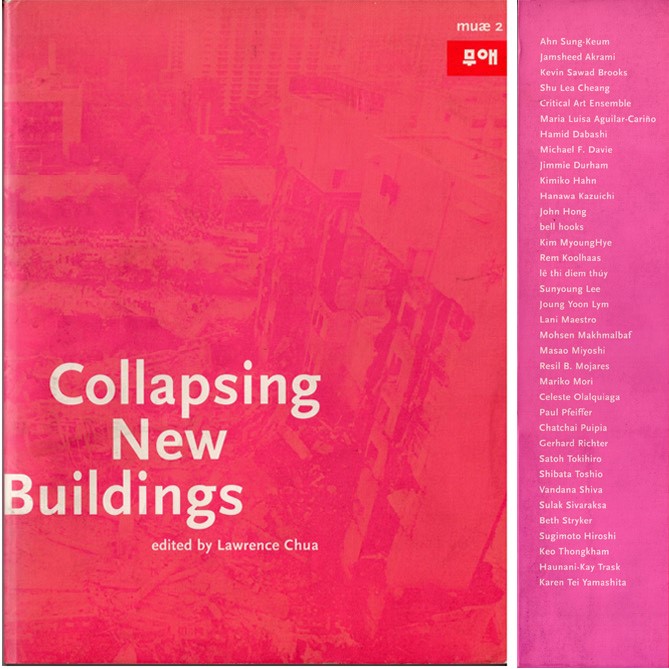 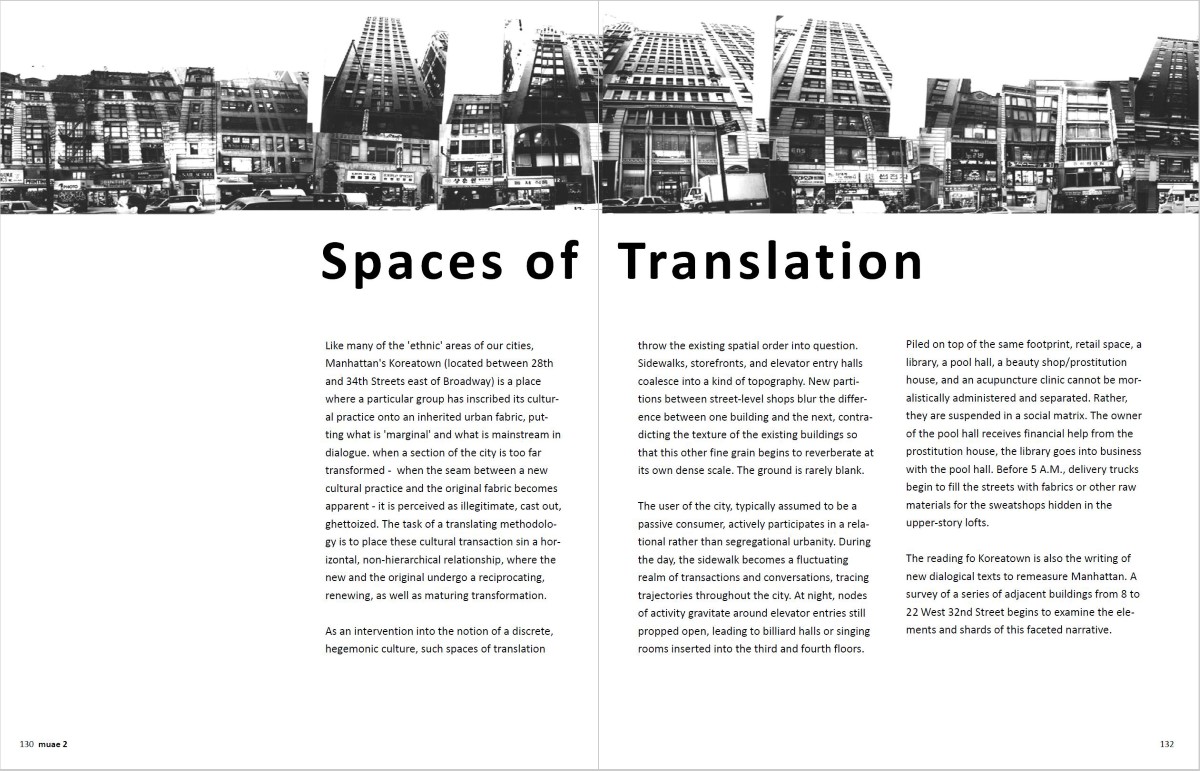 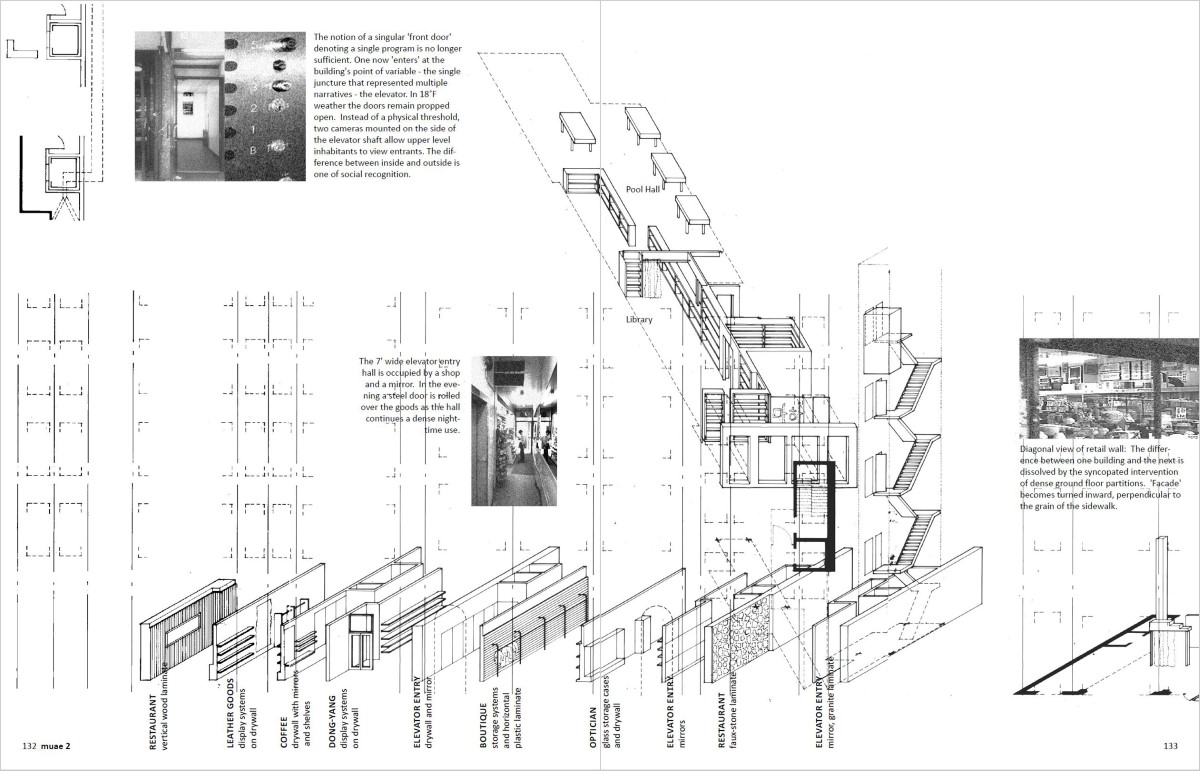 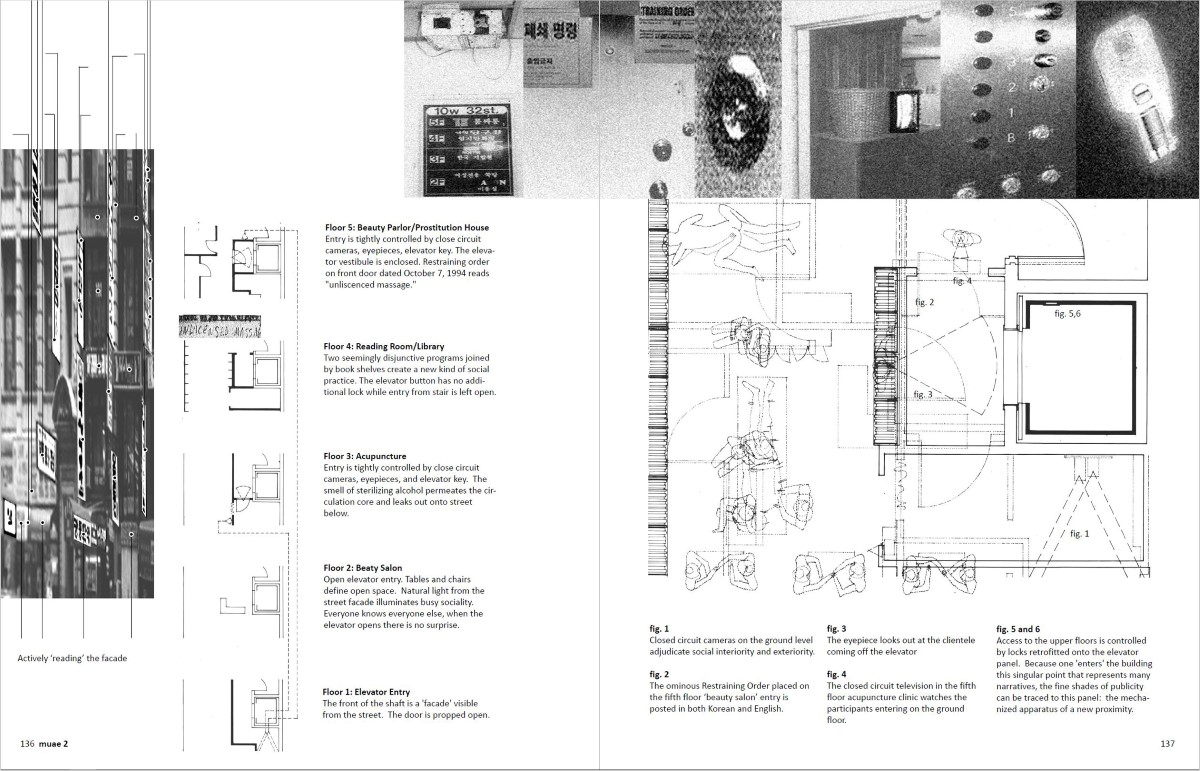