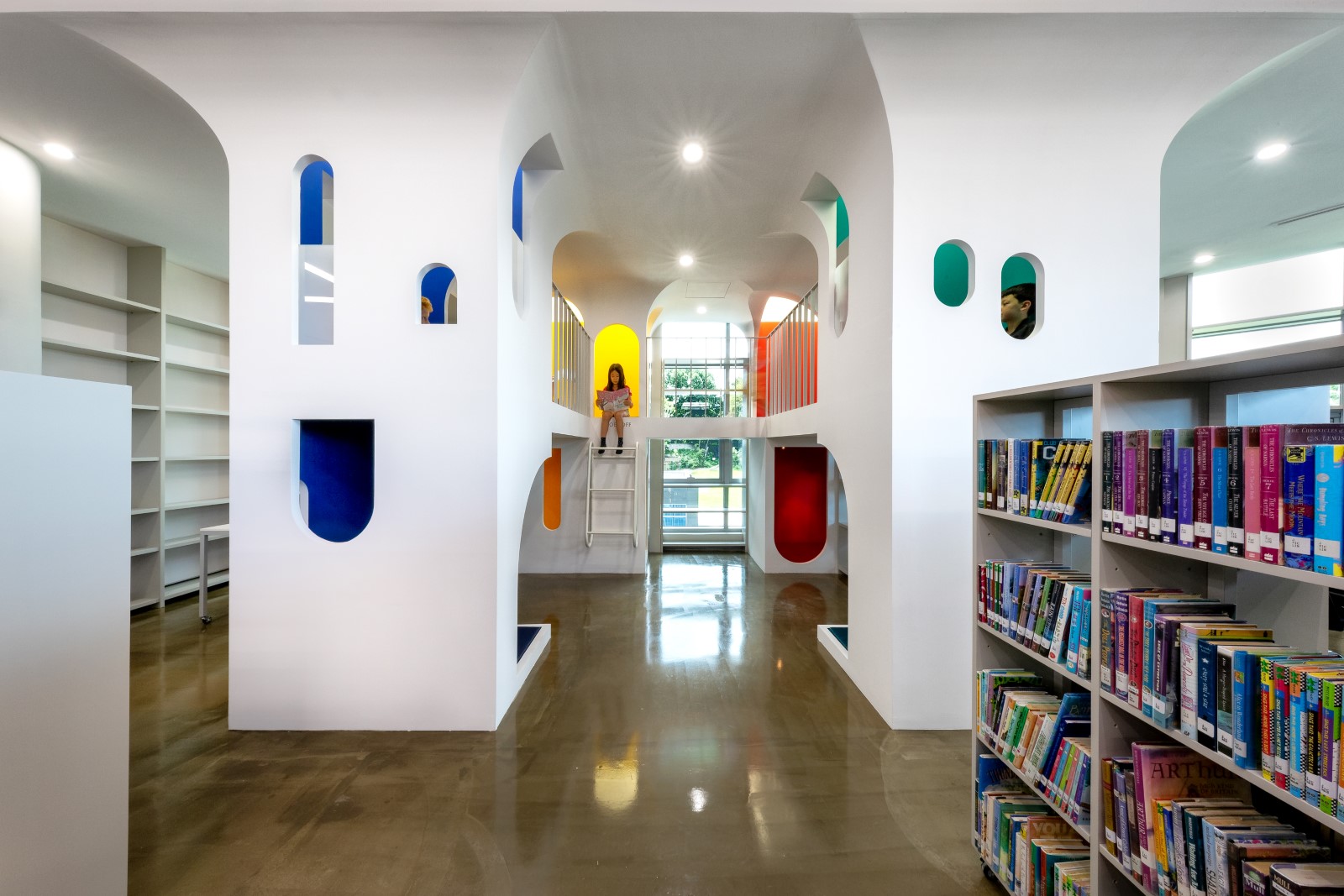 The design for this International elementary school library blends flexibility with specificity, addressing the scales of growing children through the careful integration of architecture, furniture, and learning materials. Prior to renovation, the library functioned as a generic repository for books and desks without regard for how children learn. Even as the existing building offered a high floor-to-ceiling volume, the upper and lower portions of the curtain wall were covered creating a low, pancake-like interior.

Through addressing the vertical dimensions at the personal scale, an ecosystem of customizable spaces for children and adults is created. The odd outline of the existing floor-plate was taken as a starting-point clue. The north circular envelope now houses a more free-form area connoting ideas of an urban park. Modular and moveable semi-circular shelving offer various spaces where parents, teachers, and children can learn in groups. Next to the glazing, a hammock mezzanine blends the playground with the library: The space underneath is canopy-like, while above, children can imagine floating above the clouds.

On the south side, the rectangular envelope lends itself to a more dense ‘city block’ feel. Book stacks with integrated desks act as reconfigurable building blocks for individual and collective study areas. Rising above this urban field, four reading towers further trigger the imagination of a micro-urban experience. Their forms intentionally reference historical structures connecting the library with future memories. Finally, a large conference room with folding partitions can either extend the library’s activities or close off into a private realm for teacher meetings. 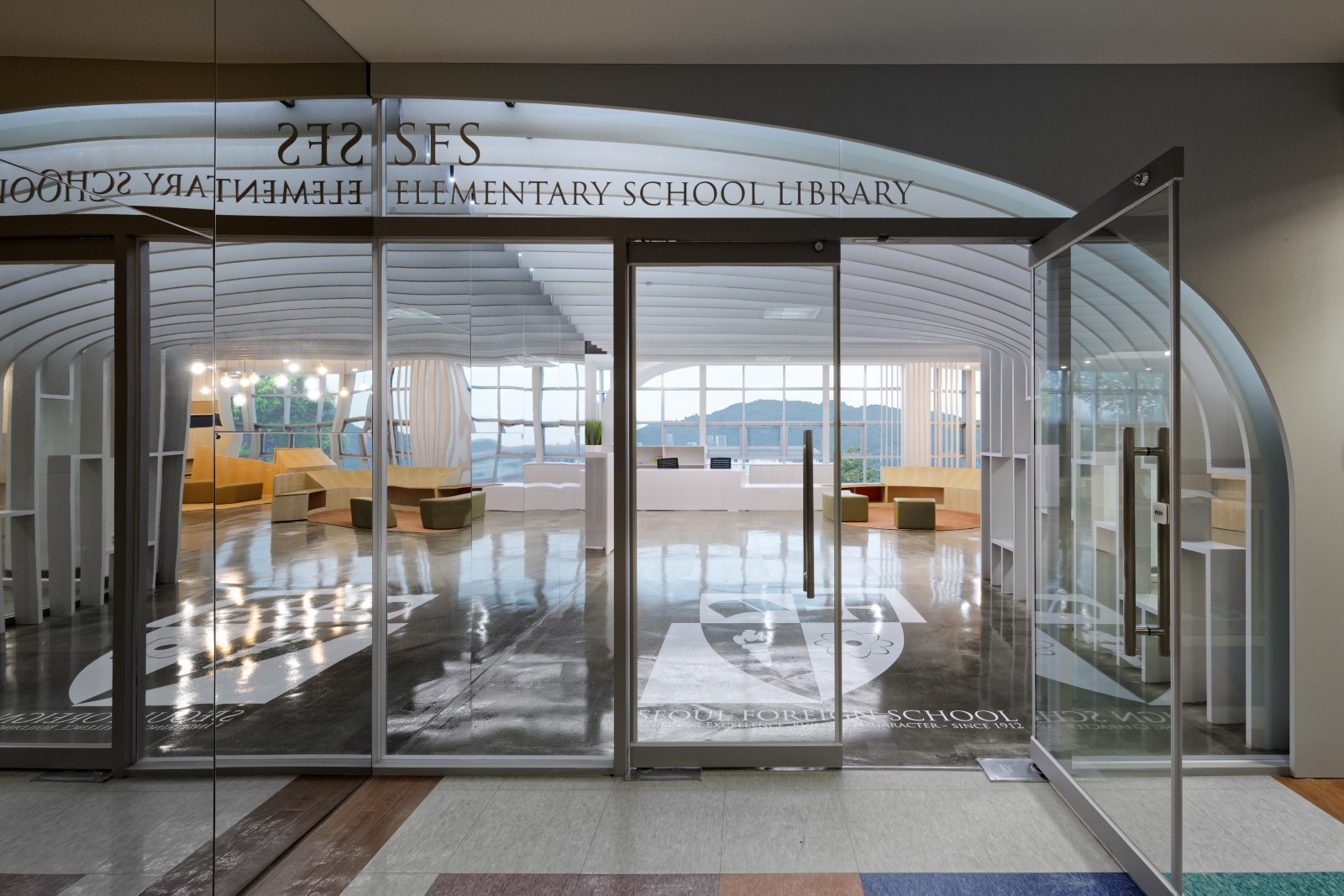 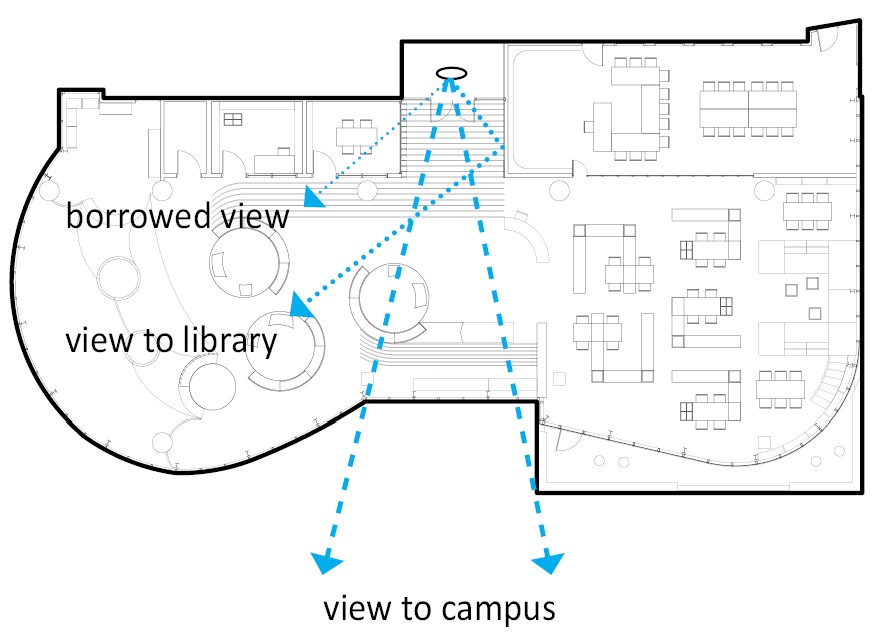 EXPANDED ENTRY
As a welcoming gesture, the entry is expanded through mirroring the entry arch with stainless steel panels. Directly in front, the view connects to the campus beyond. 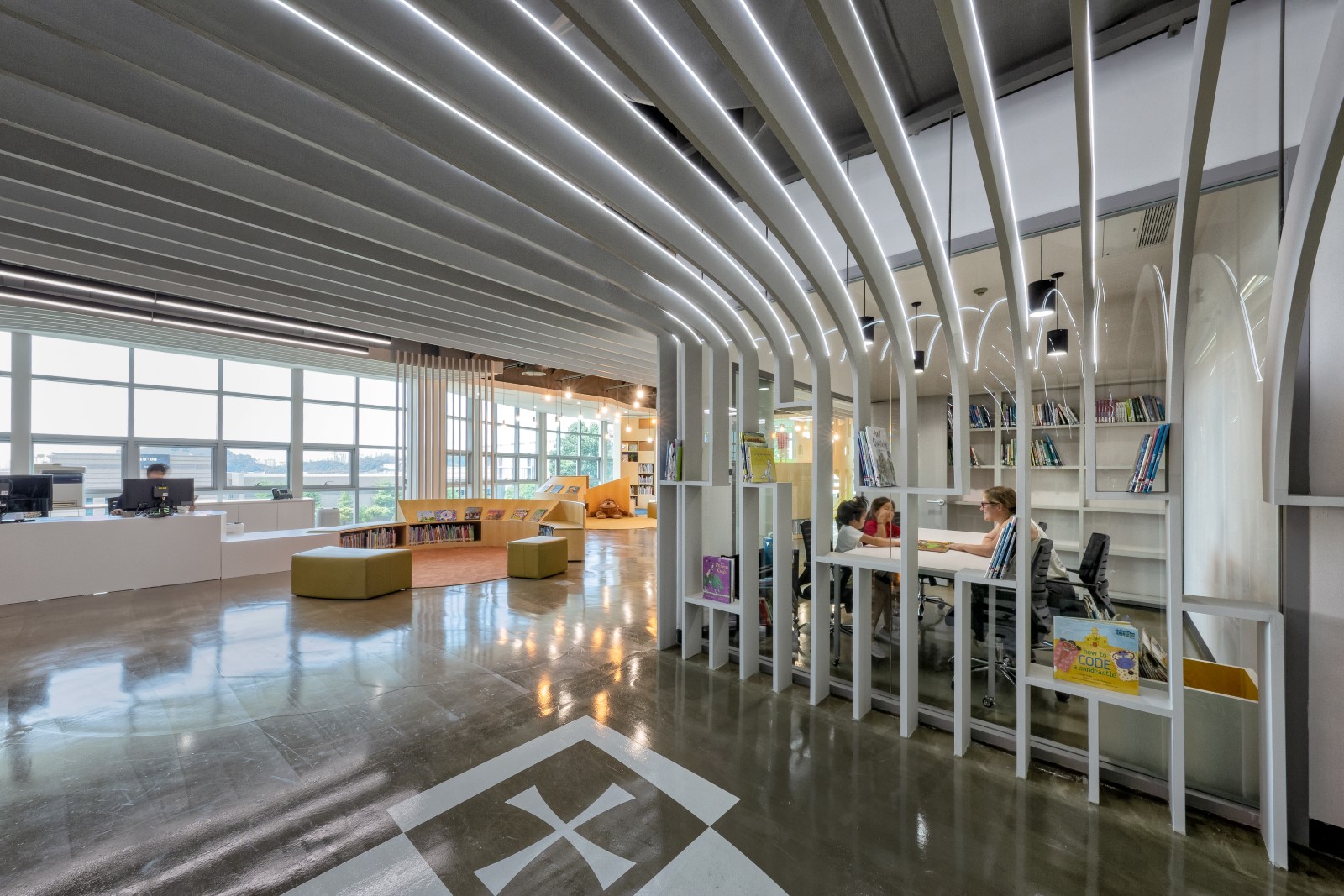 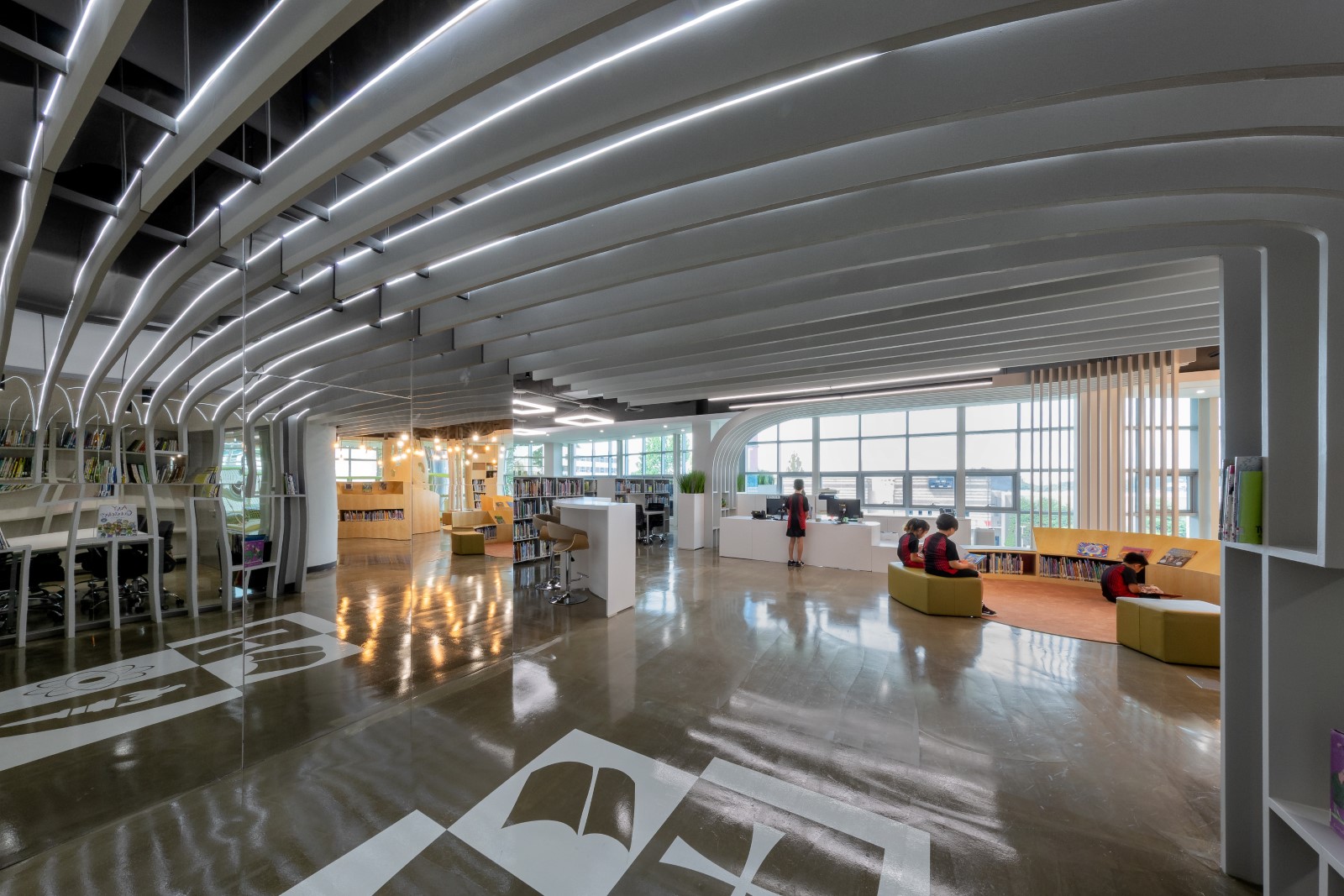 The half-arch is reflected in a mirrored stainless wall expanding the space and bringing in daylighting. 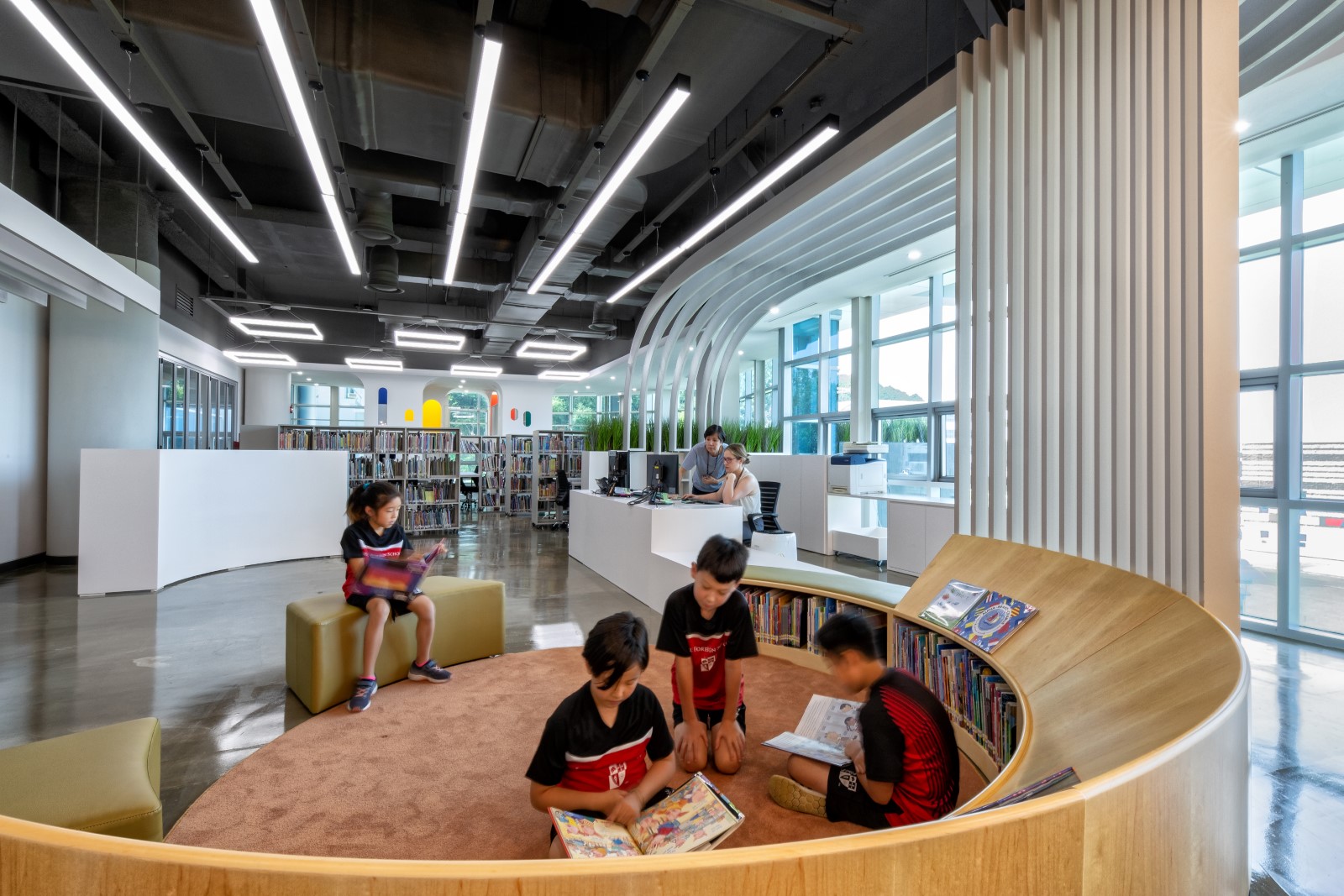 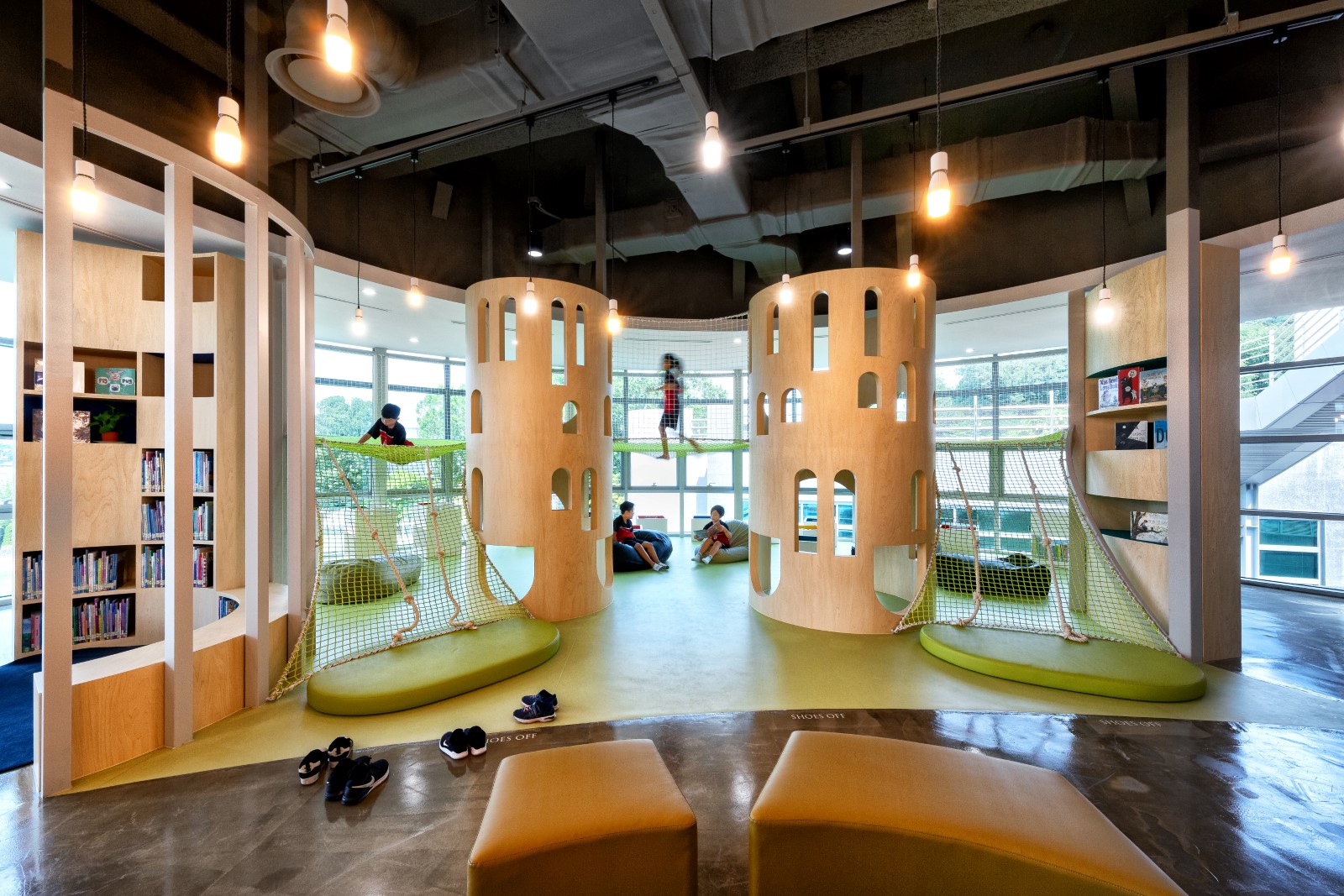 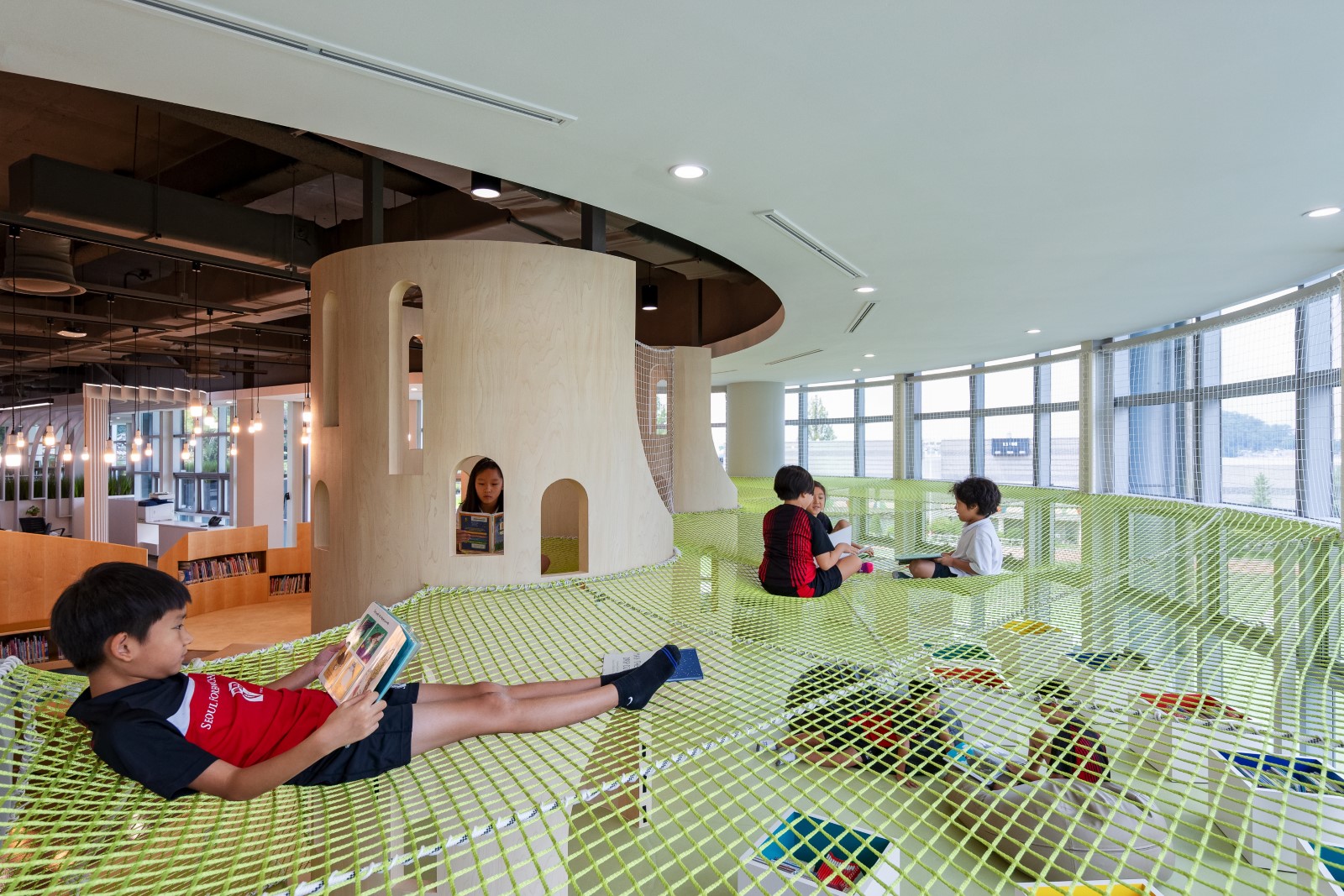 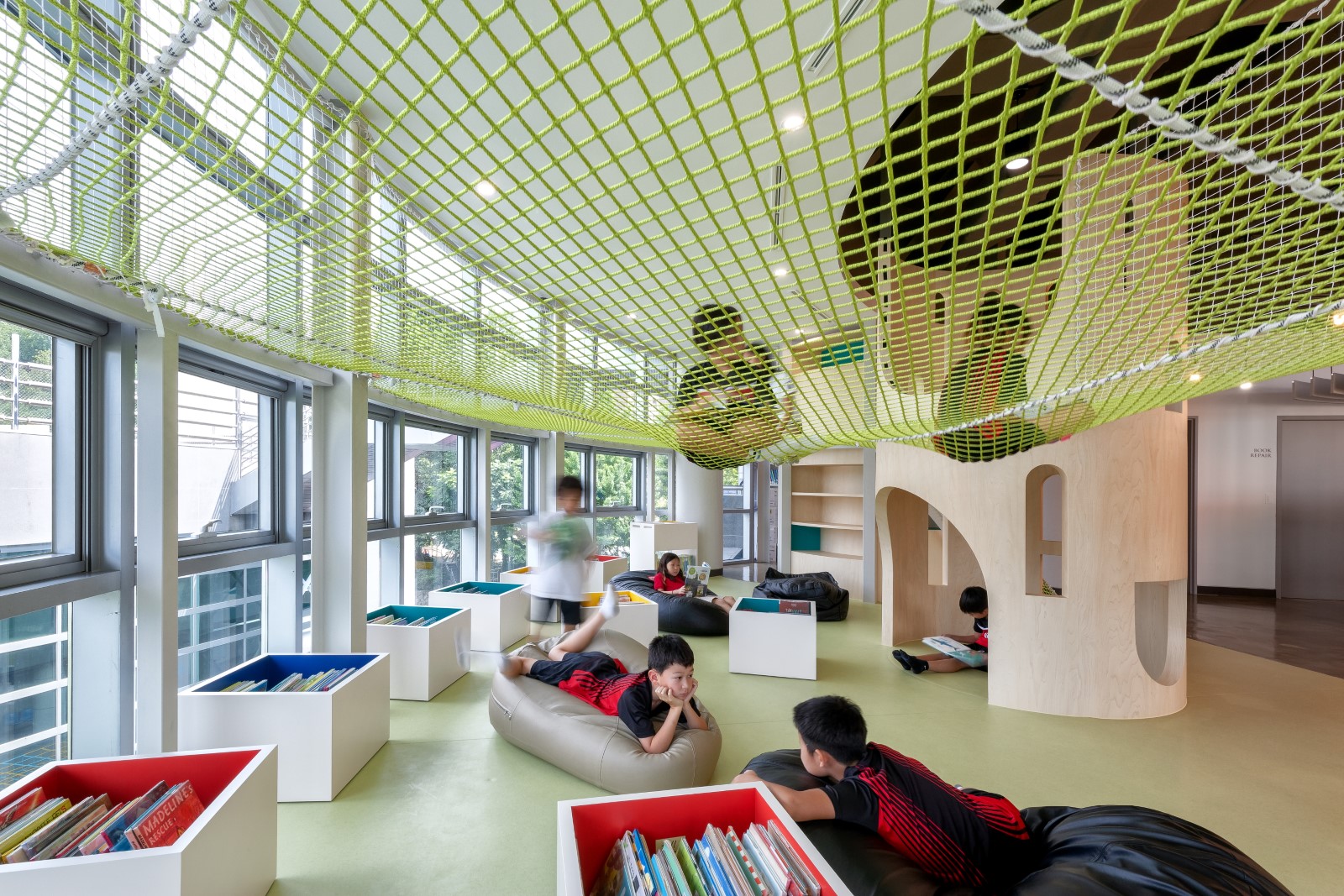 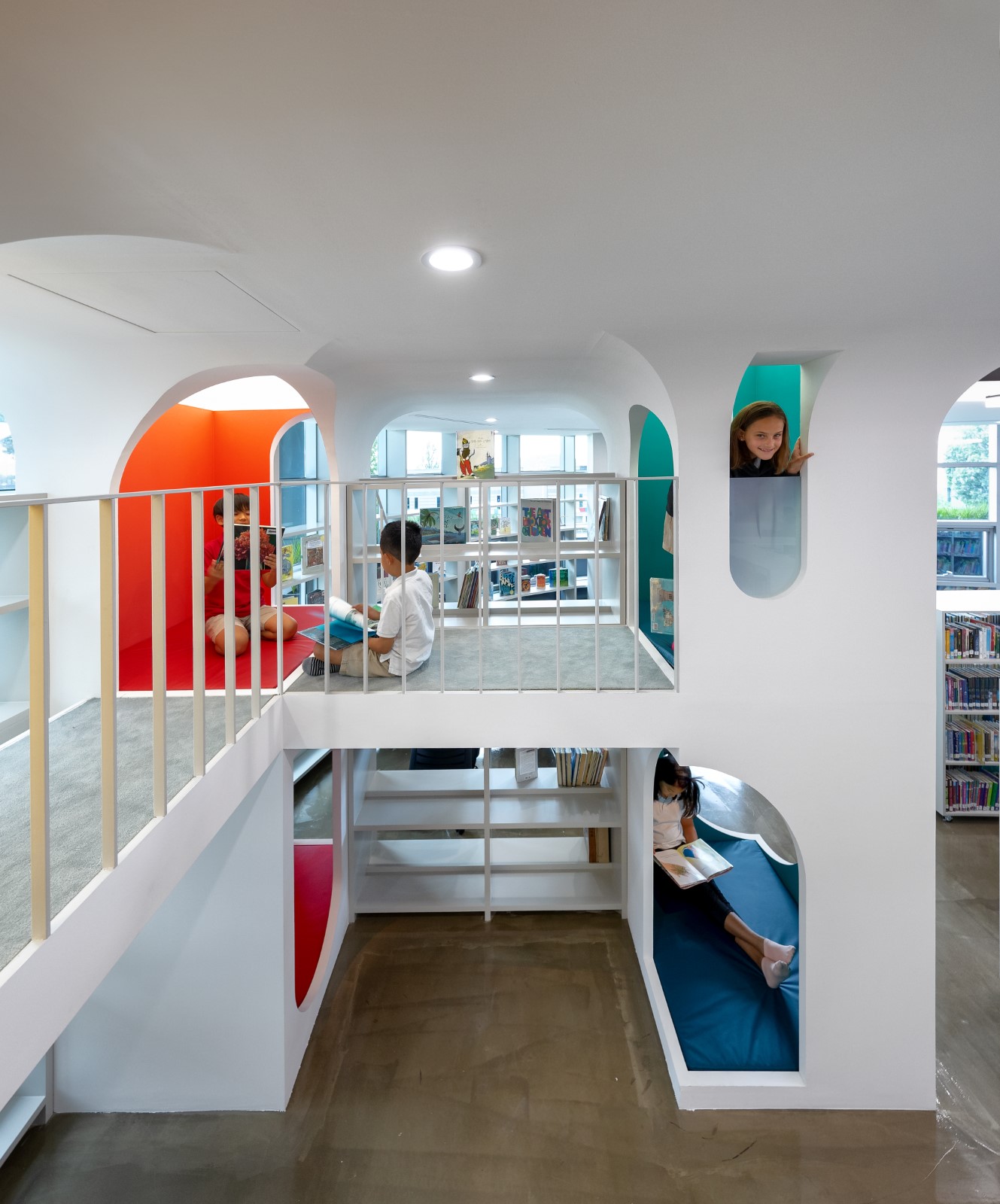 DIVERSITY AND UNIVERSAL ACCESS
Like notes on a musical scale, the concept of universal access is expanded so that children of all sizes can have equivalent experiences of the library

DIVERSITY AND UNIVERSAL ACCESS
Like notes on a musical scale, the concept of universal access is expanded so that children of all sizes can have equivalent experiences of the library

SPATIAL AND PROGRAM EXPANSION
Through a sliding door system, a multi-use conference room can be opened up to become a learning space and a ‘green room’ for filming videos

MULTI-USE
The conference room can function as a meeting room, classroom, or green room

NESTED MODULARITY
Books stacks, desks, and conference room furniture are nested in scale so they can be flexibly reconfigured

ECOSYSTEM OF MEETING AREAS
The entry and stair to the reading towers becomes an interactive meeting area (left). Inside the entry arch, a more closed conference area can be used by the librarian and parents (above). 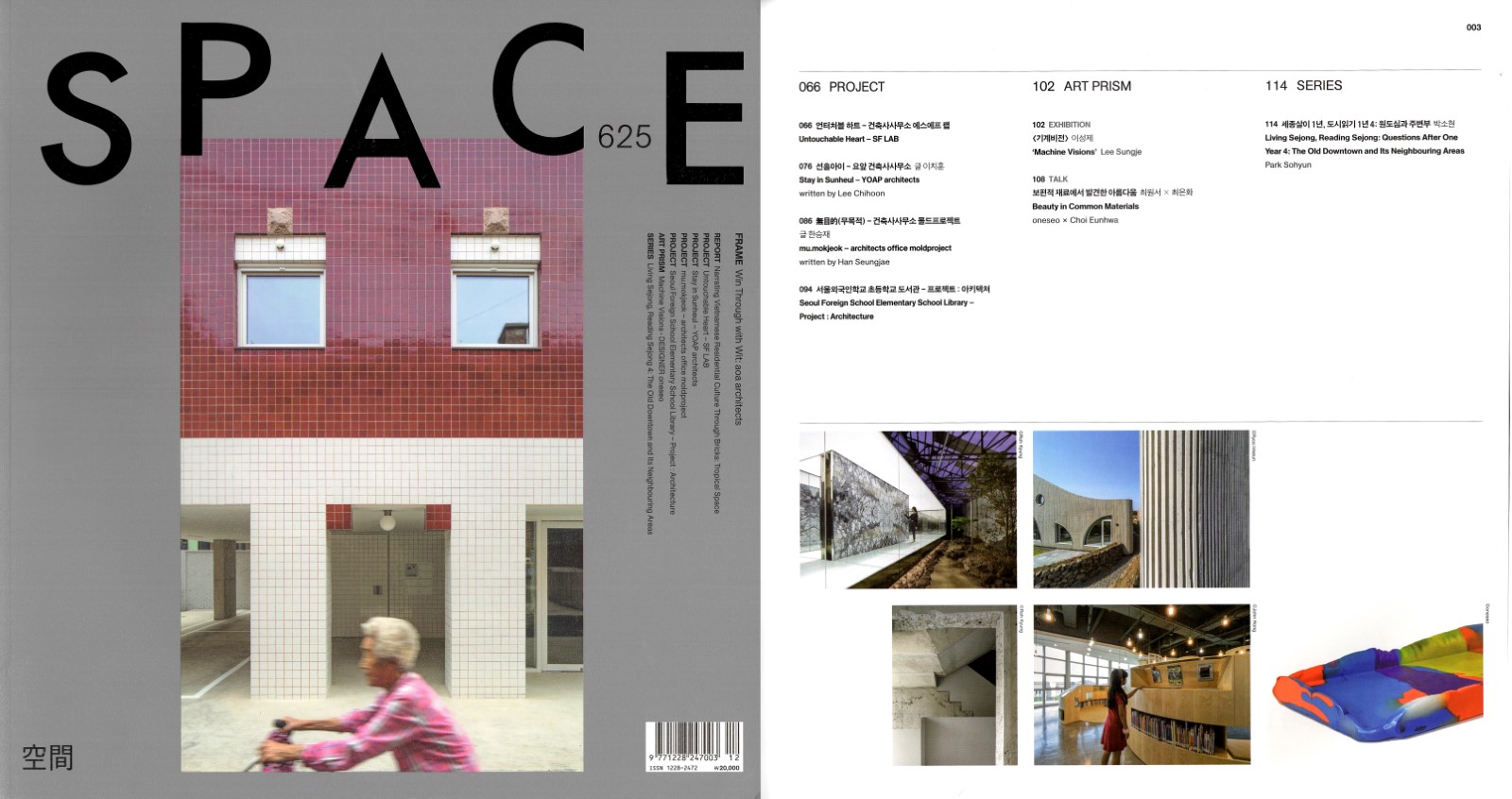 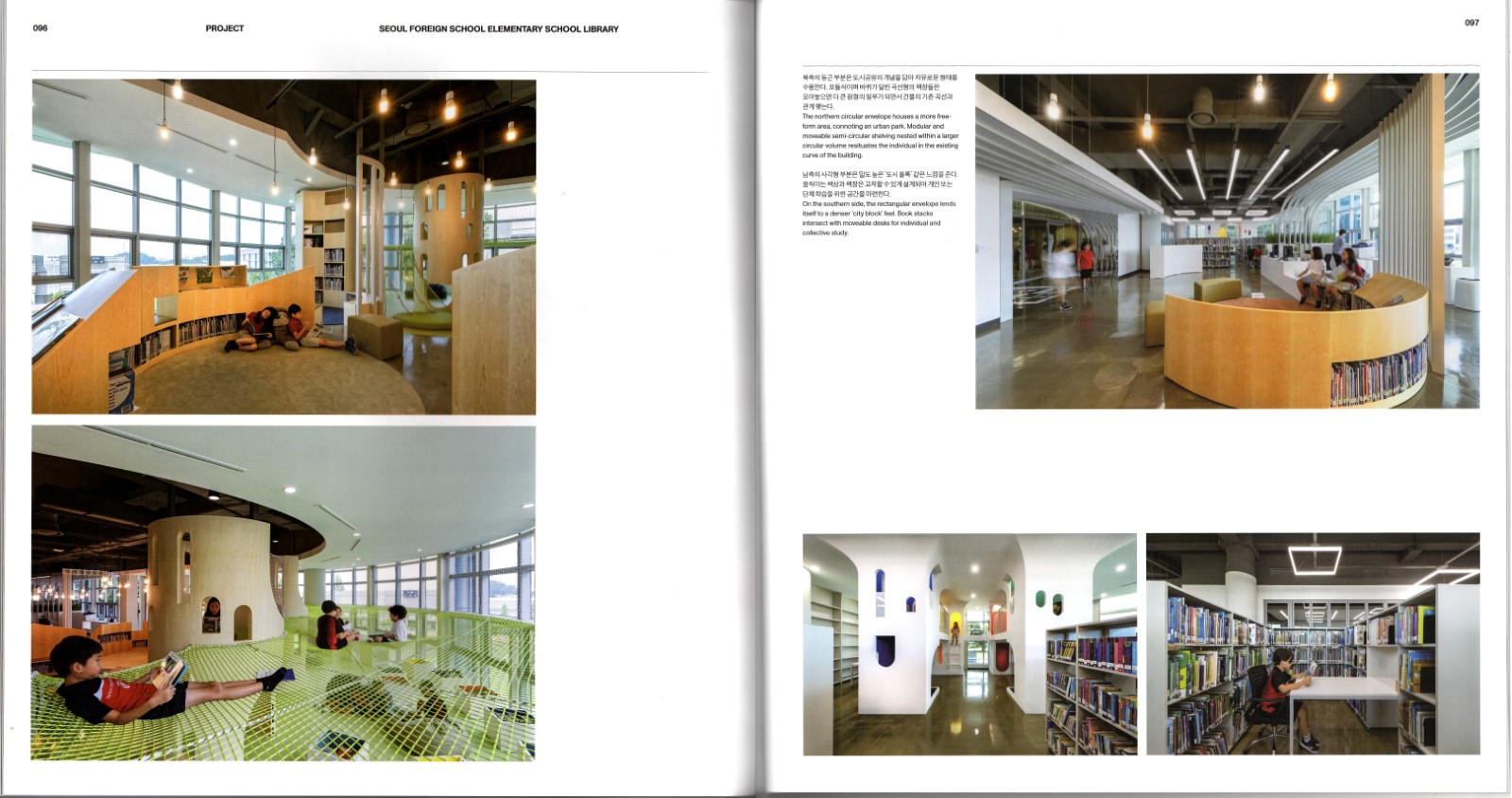 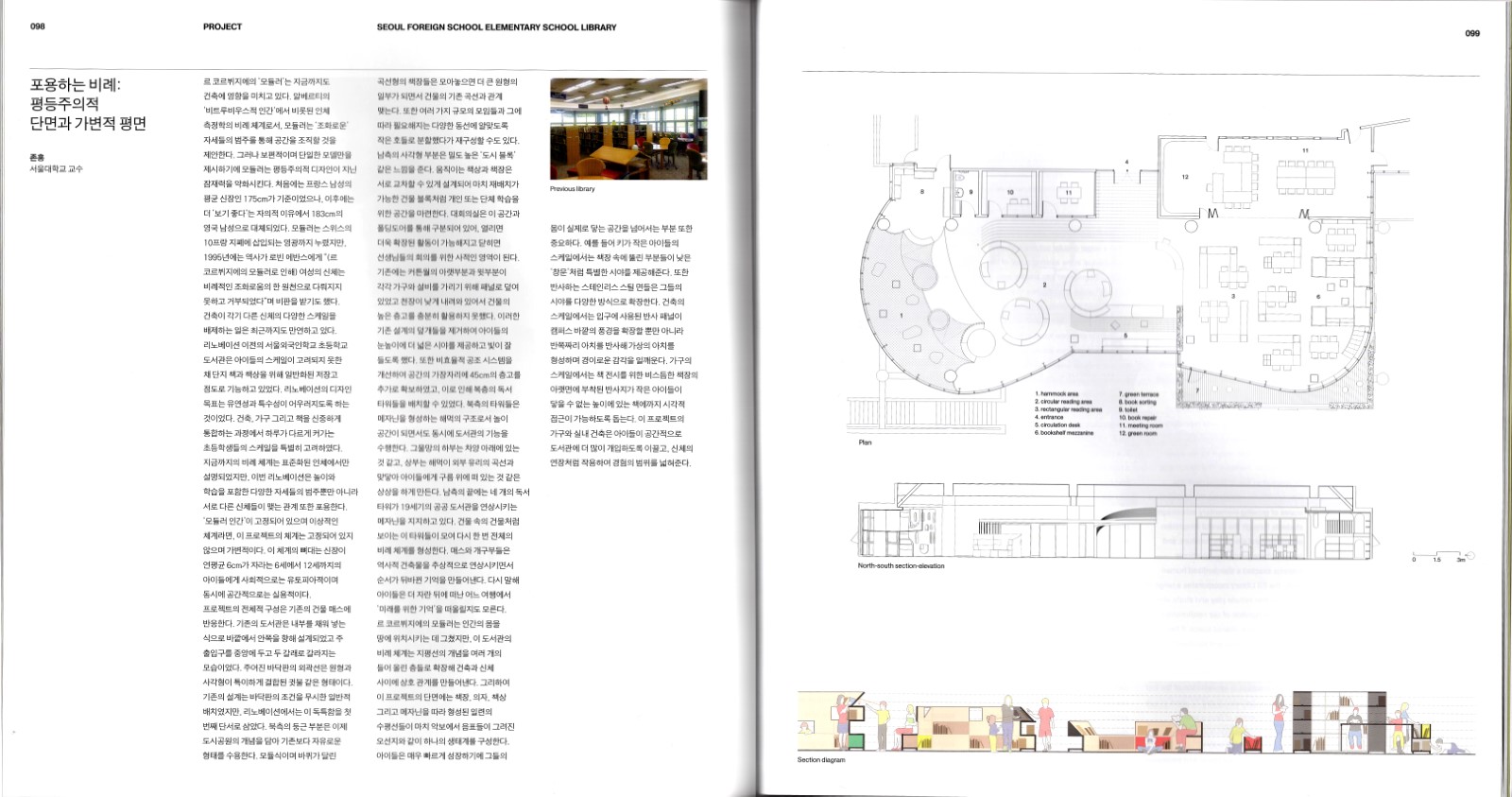 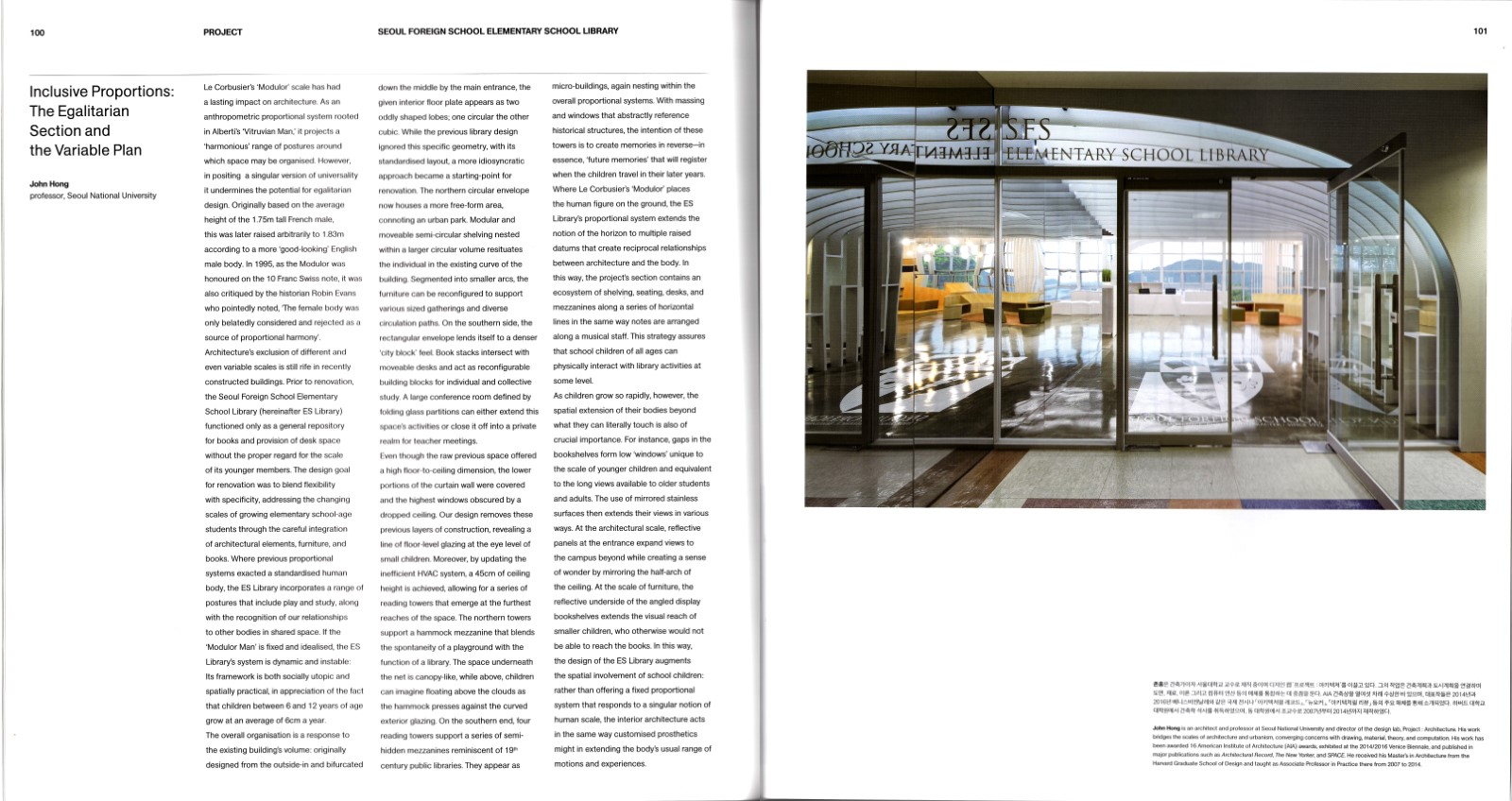 Le Corbusier’s ‘Modular’ has had a lasting impact on architecture. As an anthropometric proportional system rooted in Alberti’s ‘Vitruvian Man,’ it projects a ‘harmonious’ range of postures for us to organize space. However, its case for a singular version of universality undermines the potential for egalitarian design: Originally based on the average height of the 1.75m tall French male, it was arbitrarily raised to 1.83m based on a more ‘good-looking’ English male body. In 1995, even as the modular was being anthologized on the 10 Franc Swiss note, it was also being critiqued by historian Robin Evans who noted, “The female body was only belatedly considered and rejected as a source of proportional harmony.”

Architecture’s exclusion of different and even variable scales is still embedded in recently constructed buildings. Prior to renovation, the Seoul Foreign School Elementary School Library merely functioned as a generalized repository for books and desks without regard for the scale of children. The design goal for the renovation blends flexibility with specificity, addressing the scales of growing elementary school-age students through the careful integration of the architecture, furniture, and books. Where previous proportional systems describe a standardized human body, the ES library incorporates a range of postures that include play and study, but also relationships to other bodies different from our own. If the ‘Modular Man’ is fixed and idealized, the ES library’s system is dynamic and instable: Its framework is both socially utopic and spatially practical as children between 6 and 12 years old grow quickly at an average of 6cm a year.

The overall organization is a response to the existing building massing: Originally designed from the outside-in and bifurcated down the middle by the main entry, the given interior floor plate appears as two oddly shaped lobes, one circular the other cubic. While the previous library design ignored this specific geometry with its generalized layout, the idiosyncrasy became a starting-point clue for the renovation. The northern circular envelope now houses a more free-form area connoting ideas of an urban park. Modular and moveable semi-circular shelving nested within the larger circular volume relate the individual back to the existing curve of the building. Segmented into smaller arcs, the furniture can be reconfigured to support various size gatherings and diverse circulation paths. On the south side, the rectangular envelope lends itself to a denser ‘city block’ feel. Book stacks intersected with moveable desks act as reconfigurable building blocks for individual and collective study. A large conference room defined by glass folding partitions can either extend this space’s activities or close off into a private realm for teacher meetings.

Even as the raw existing space offered a high floor-to-ceiling dimension, the lower portions of the curtain wall were covered and the highest windows obscured by a dropped ceiling. Our design removes these previous layers of construction, revealing a line of floor-level glazing at the eye level for smaller children. Moreover, by updating the inefficient HVAC system, 45cm of ceiling height is gained allowing for a series of reading towers that emerge at the far ends of the space. The northern towers support a hammock mezzanine that blends the spontaneity of the playground with the function of the library. The space underneath the net is canopy-like, while above, children can imagine floating above the clouds as the hammock is pressed against the curved exterior glazing. On the southern end, four reading towers support a series of semi-hidden mezzanines reminiscent of 19th century public libraries. They appear as micro buildings, again nesting within the overall proportional system. With massing and windows that abstractly reference historical structures, the intention of these towers is to create memories in reverse – in essence ‘future memories’ that will register when the children travel in their later years.

Where Le Corbusier’s ‘Modular’ places the human figure on the ground, the ES Library’s proportional system extends the notion of the horizon to multiple raised datums that create reciprocal relationships between architecture and the body. In this way, the project’s section contains an ecosystem of shelving, seating, desks, and mezzanines along a series of horizontal lines in the same way notes are arranged along a musical staff. This strategy assures that school children of all ages can physically interact with the activities of the library at some level.

Because children rapidly grow however, the spatial extension of their bodies beyond what they can literally touch is also important. For instance, gaps in the bookshelves form low ‘windows’ unique to the scale of young children and equivalent to the long views available to older students and adults. The use of mirrored stainless surfaces then extends their views in various ways. At the architectural scale, reflective panels at the entrance expand views to the campus beyond while creating a sense of wonder by mirroring the half-arch of the ceiling. At the furniture scale, the reflective underside of the angled display bookshelves extends the visual reach of smaller children that otherwise would not be able to reach the books. In this way, the design of the ES Library augments the spatial involvement of school children: Rather than a fixed proportional system that responds to a singular notion of human scale, the interior architecture acts in the same way a customized prosthetic might extend the body’s usual range of motions and experiences.

The design for this international middle school library adaptively transforms a closed-off ground floor of a 35-year-old classroom building into a light, porous, learning space inextricably tied to the larger campus. As the given footprint was fragmented by a server room…

Preservation as a movement, usually understood as a conservative force that works to strengthen the idea of a linear, univocal, ‘American’ history, originally emerges in the 1960’s to put forth a more radical proposition: That preserving a structure by instilling it with a new…

Like reconstructing More’s Utopia in reverse, our proposal for Chambord’s future is a simultaneous overlay of the past and present. Extending the diverse programming that marked the important shift of the château from private to public control…