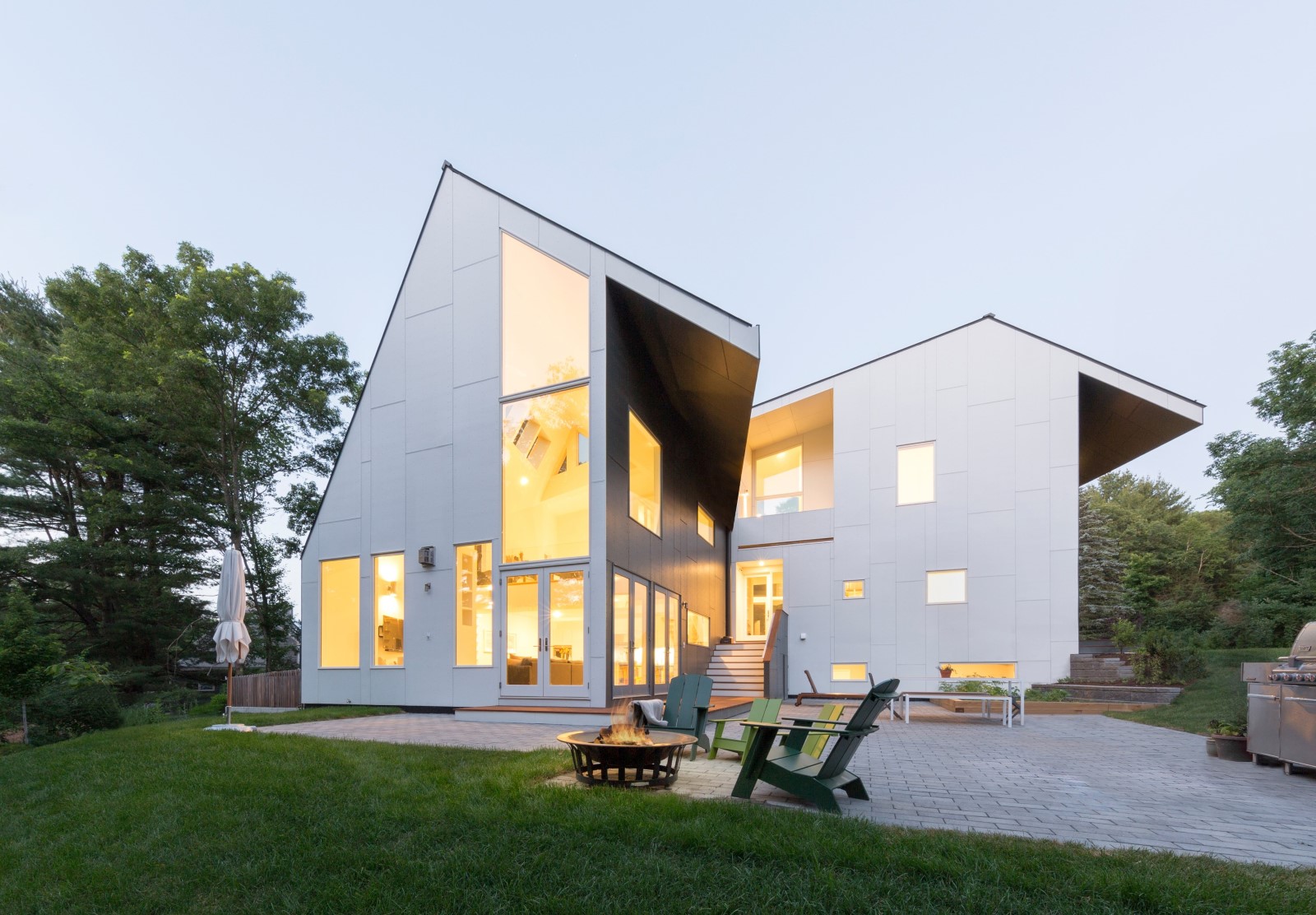 Located on a strictly preserved wooded area, this project converges with the site and environment through a zero-energy strategy. While the massing adheres to tight setback restrictions, the roof breaks free of the house’s orthogonal geometry to optimize orientation of the solar panels. At the same time, the resulting roof overhang shields the interior from hot summer sun while allowing winter sunlight in for passive heating. To minimize site disturbance, the natural site slope is used to generate a split level section that connects public, semi-public and private zones of the house with the natural surrounds.

The interior space is a series of terraces that follow the natural slope of the existing topography.

The site was minimally disturbed through a split-level layout. A rotated roof on the exterior maximizes the efficiency of the solar panels while creating unique interior volumes. A parametric script developed by P:A and a Harvard research team was used to optimize the geometry of the roof and placement of windows.

As the north side has few opening for insulation purposes, a monolithic appearance is intentionally sought.

Overhangs produced by the solar orientation of the roof are also used to shelter openings to the surrounding landscape.

The double height entry connects the front and back, exterior and interior.

The double height living area invites views of the tall trees of the preservation areas beyond. The corner doors extend the activities to an adjacent deck.

The open kitchen is the geometric and social center adjacent to the main stair.

The public spaces are interconnected in plan but still separated by changes in levels and differing roof profiles.

By matching the existing sloped site, the house is organized in half-levels creating a constant flow between spaces.

A semi-public mezzanine craft room hovers above the more public living spaces below and acts as a transition before entering the private spaces of 2nd floor bedrooms.

The master bath takes advantage of the roof geometry to create a lofty place of retreat.

As a figure in the landscape, the house is clad in white cement board panels as a full-scale diagram of the way the traditional pitched-roof typology is transformed.

With the recent institutionalization of sustainability earmarked by the advent of the LEED ‘scoring’ system in the mid-1990’s, there has constantly been a tacit struggle between energy performance and architectural form. An important historical detail is that LEED’s early founders were scientists, not architects, even as they sought broad-based consensus across disciplines. In this way ‘building science’ has accelerated as an autonomous discipline shaping sustainable architecture, and its major components of envelope and mechanical systems have become its most powerful signifiers. Exposed solar panels and super-insulated walls have come to represent architecture’s advocacy of environmental design as an ‘agenda,’ becoming a kind of semantic stand-in for the politics that the building represents.

In an attempt to reclaim architecture’s position in generating form and refining typology, Tung House converges active and passive sustainability strategies with architectural sequence and space in the creation of a zero-energy dwelling. Located on a strictly regulated and preserved wooded area in Massachusetts, the double challenge was to preserve the existing physical conditions of the site while maximizing the potential for energy generation in a northerly climate where sunlight is less abundant.

Because of ‘buffer zones’ protecting the wetlands near the property, the relatively large parcel of land contained only a small buildable area. While the building massing adheres to these tight setback restrictions, the roof breaks free of the orthogonal geometry to optimize the orientation of the solar panels for the active generation of electricity and hot water. The 36 PV panels provide over 9-kW of power in the summer providing an excess of energy that is then transferred back into the municipal power grid. In the wintertime where less sunlight is available, the system equalizes the use of energy by also relying on 3 hot-water solar panels that provide the heating for the hydronic radiant floor systems.

The specific calibration of the roof overhangs also provides passive energy solutions: Their geometry shades the interior from the summer sun while allowing winter sunlight in for supplemental heating. In terms of the building profile, decoupling the roof geometry from the building mass creates a new typological variation of the traditional pitched roofs seen in the area. Viewed from the entry, the massing appears as a compact ‘barn-like’ profile, while from the backyard the same roof appears as cantilevered wings that provide shelter for social activities connecting house and landscape.

As the city ordinance strictly limited disturbing the existing site, the orientation of the massing also minimizes excavation. The section of the house follows the site’s natural contours, creating a split-level condition of half-levels. The result is a continuous experience from public, semi-public, and private spaces. As one enters, a view directly connects the front of the house to the preserved natural landscape of the backyard. An open stair becomes the communicating core of the house: A half-level down takes one to a large loft-like public area containing living, kitchen, dining, and play areas. These directly connect to the landscape through large swing doors that erode the corners of the room. Meanwhile, a half-level up connects to a hovering mezzanine with a craft and play area that is visually connected to but private from the living areas directly below it.

Even as the house is open, rather than presented as one undifferentiated volume, the ceiling height varies drastically, defining diverse areas of use. At the upper levels, the rotated roof creates dynamic relationships between the regularity of rectangular rooms and the irregularity of the varied ceiling planes. It constantly and subtly ‘unsettles’ the occupant, suggesting varying perspectives, movements, and lighting conditions that change with one’s specific position.

Beyond the experiential level, the section is also integral to the passive and active ventilation strategies. In the summer months, natural cooling is provided by stack ventilation where automated skylights draw cooler air from the lower regions of the house releasing the hotter air through the roof. Similarly, in the winter, the system is engineered so that radiant flooring only needs to be provided on the lower levels: Rising heat is vented to the upper private level through low-energy consuming fans rather than large ducted systems. The implementation of this optimized HVAC system is critical not only for a zero-energy result but in also minimizing construction costs.

Instead of the incorporation of sustainable strategies separately applied to the architecture after the architectural logic of the project is set, the Tung House is a small-scale example of how the convergence of building science and spatial relationships can create something more than the sum of its parts. Through simultaneously solving site conditions, patterns of use, and energy optimization, a new synthesis can be produced beyond either the autonomous architectural project or the successful implementation of sustainable strategies. In the case of the Tung House, the decoupling of the roof from the programmatic volume aims to extend both technical and experiential aspects. For the former, active solar performance and the use of daylighting for passive energy is optimized. For the latter, the typological ‘play’ of the traditional pitched roof form is turned into something slightly odd or incidental that transforms expectations when viewed from the exterior. From the interior, the roof form creates differentiation and subtle discontinuity within an otherwise open volume.

Fragments of a New Housing Language

If we use language as a metaphor, a current wave of architects has quietly begun reassembling the elements of housing into new syntaxes. While each work in this book and represents a unique solution, their innovations can be seen as typological advances…

The 3 new townhouses transform Cambridgeport’s woodframe type, dynamically addressing boundaries between inside and outside, private and community. A critique of the inward looking ‘winterized box,’ the project incorporates double…

As a prototype building that demonstrates how infrastructure can be salvaged and reused, the structural system for this house is comprised of steel and concrete discarded from Boston’s Big Dig. Utilizing over 600,000 pounds of…

City as Verb takes the familiar nouns used to describe our urban environments and simply changes them into verbs. This seemingly simple conceptual shift has deep consequences: For instance, instead using the word ‘street,’ we change it to ‘moving’…