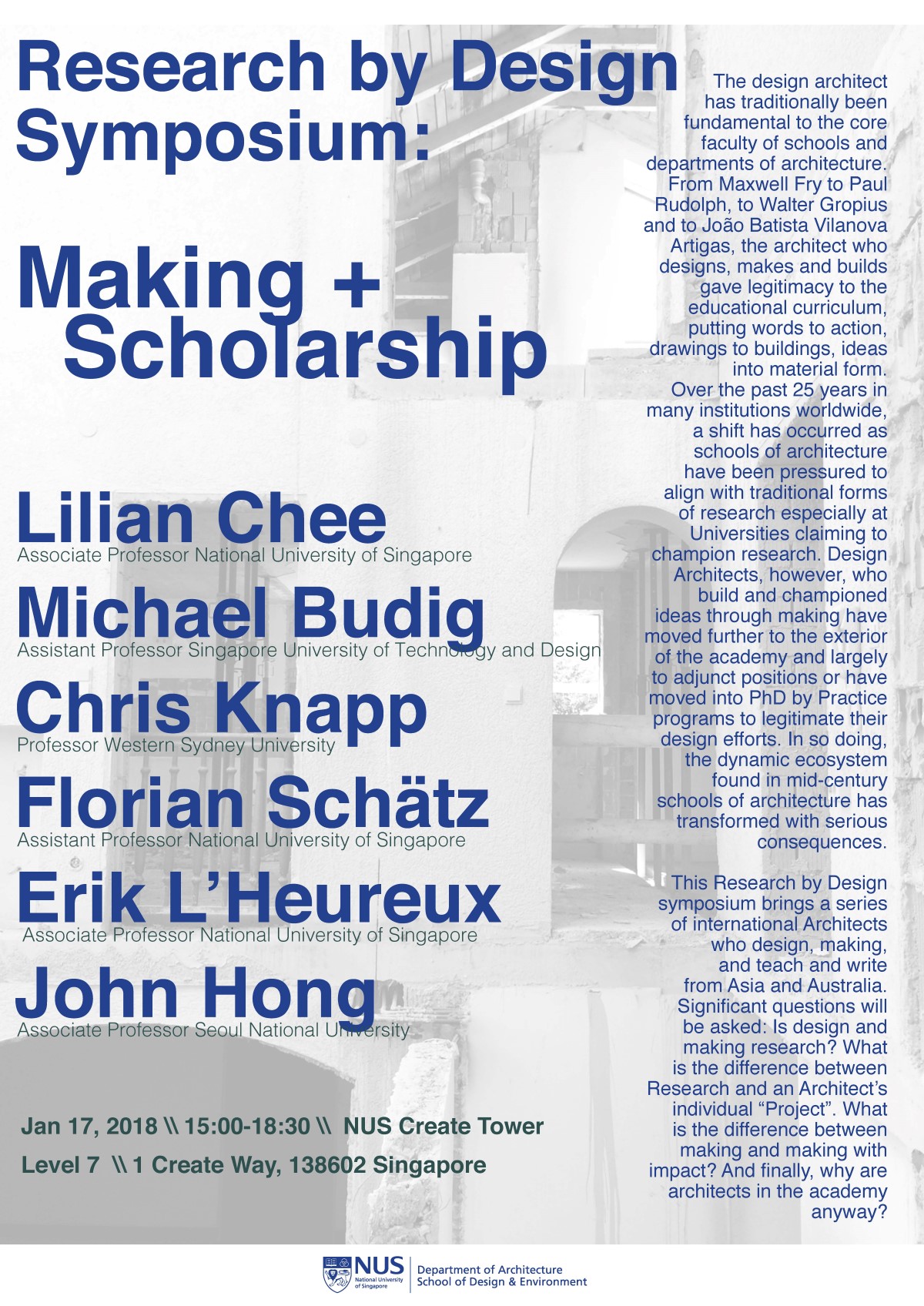 The design architect has traditionally been fundamental to the core faculty of schools and departments of architecture.

From Maxwell Fry to Paul Rudolph, to Walter Gropius and to João Batista Vilanova Artigas, the architect who designs, makes and builds gave legitimacy to the educational curriculum, putting words to action, drawings to buildings, ideas into material form. Over the past 25 years in many institutions worldwide, a shift has occurred as schools of architecture have been pressured to align with traditional forms of research especially at Universities claiming to champion research. Design Architects, however, who build and championed ideas through making have moved further to the exterior of the academy and largely to adjunct positions or have moved into PhD by Practice programs to legitimate their design efforts. In so doing, the dynamic ecosystem found in mid-century schools of architecture has transformed with serious consequences.

This Research by Design symposium brings a series of international Architects who design, making, and teach and write from Asia and Australia. Significant questions will be asked: Is design and making research? What is the difference between Research and an Architect’s individual “Project”. What is the difference between making and making with impact? And finally, why are architects in the academy anyway?

Michael Budig is Assistant Professor in Architecture and Sustainable Design at the Singapore University of Technology and Design. He held positions as affiliate faculty at Massachusetts Institute of Technology, senior researcher at ETH Zurich, and he worked with Zaha Hadid and Patrik Schumacher at the University of Applied Arts Vienna and the University of Innsbruck. He is a licensed architect in Austria and was director of a multi-disciplinary office on architecture, urbanism and design strategies. Built projects include industrial and residential buildings. His research focuses on innovative form and construction intelligence, the implementation of computational technologies, timber construction, and hybrid materials.

Professor Chris Knapp joined the School of Computing, Engineering and Mathematics as the inaugural Chair of Architecture at Western Sydney University in October 2017.Trained as an architect, Chris is an educator, practitioner, and researcher most recently based on the Gold Coast as Director of the digital fabrication and design practice, Studio Workshop, and a seven-year academic post at Bond University. He holds a Master of Architecture from Princeton University. Chris’s research is concerned with digital fabrication technologies and their impact upon future modes of architecture and construction practice. The work of Professor Knapp’s practice, Studio Workshop, is closely aligned to his research agenda and is used as a fertile ground for experimentation under real-world conditions.

German architect, researcher and entrepreneur Florian Schätz has spent the past ten years combining education, research and practice. He received his Master Degree from the ETH Zurich and worked in Los Angeles, Rotterdam and Vienna before taking a position as Assistant Professor for Design and Construction at the National University of Singapore. As director of Schätz Design + Construction GmbH and founder of the multi-disciplinary design studio FACE, he is testing and building innovation, currently working on a low energy house, that is a monolithic cast in lightweight thermal concrete. Florian owns a patent for a compact vertical aircraft parking system of which several variations have been built in Europe and Singapore. His third book with ORO Editions, “Printing Architecture – Species of the Tropical Envelope” will be available in 2018.

John Hong AIA, LEED AP is an architect and professor at Seoul National University and director of the design lab, Project : Architecture. His work bridges the scales of architecture and urbanism and converges the mediums of drawings, material, theory, and computation. His work has been awarded 15 American Institute of Architecture (AIA) awards, exhibited at the 2014/2016 Venice Biennale, and published in major media such as Architectural Record, The New Yorker, and Space Magazine. He received his Master’s in Architecture from the Harvard Graduate School of Design and taught as Associate Professor in Practice there from 2007-14.

Erik G. L’HEUREUX, AIA, LEED AP BD+C is an American architect and educator. He is Associate Professor and B.A. Architecture Program Director at the National University of Singapore. Erik received his Master of Architecture from Princeton University and previously taught at the Cooper Union in New York City. In 2017, Erik was the Ruth and Norman Moore Visiting Professor at Washington University in St. Louis. He has received several design awards, most recently a 2017 and 2016 Society of American Registered Architects Design Award. In 2015, Erik was awarded with the Wheelwright Prize from Harvard University. He is published widely; “Deep Veils,” a book on his design thinking is with ORO Edions, 2014.

Lilian Chee is History Theory Criticism Cluster Leader at the Department of Architecture, National University of Singapore. Her work is situated at the intersections of architectural representation, gender and affect in a contemporary interdisciplinary context. She conceptualized, researched and collaborated on the award-winning architectural essay film 03-FLATS (2014) – about single women occupants in Singapore’s public housing. Her publications include the forthcoming monograph Architecture and Affect: Precarious Spaces (Routledge, 2018) and a co-edited volume Asian Cinema and The Use of Space (Routledge, 2015). She has lectured at the Bartlett, Delft, ETH Zurich and the Berlage Centre, and is on the editorial boards of The Journal of Architecture and Architectural Theory Review.