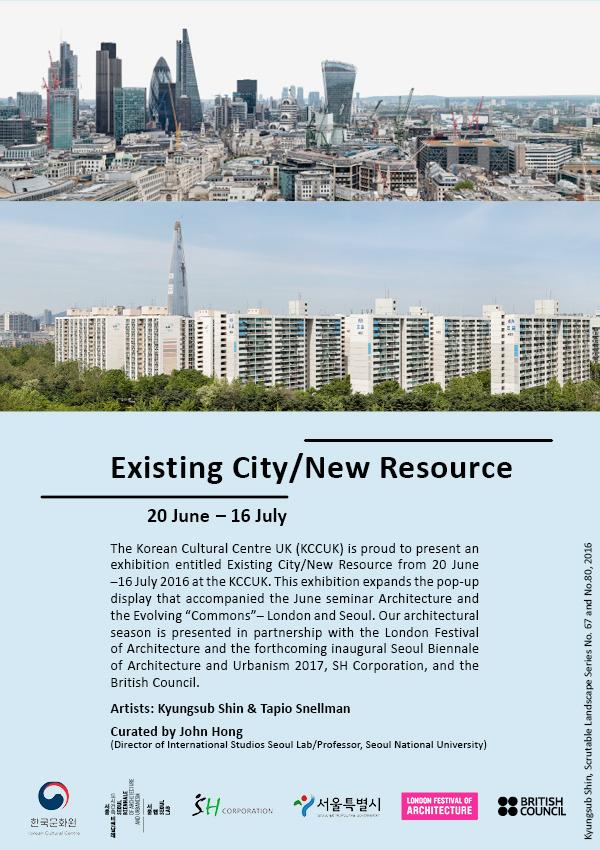 The Korean Cultural Centre UK presents Existing City / New Resource, an exhibition in partnership with the Seoul Biennale of Architecture and Urbanism 2017, the London Festival of Architecture 2016 and Art Night London. Curated by John Hong, the work focuses on the fine grain social, cultural, and spatial qualities of Seoul – and how the city’s dynamic mix is a rich eco-system that cultivates urban transformation. Specifically these transformations are taking the form of ‘urban recycling,’ where the existing city becomes a new resource for new forms of living. But even as recycling has become a common household phrase, as a society we have only begun to grapple with the concept when applied to the city itself. Terms such as ‘adaptive reuse’ merely point toward a compromised fit of program to an existing building even though the very concept of recycling with its more advanced subsets of ‘upcycling’ and ‘pre-cycling’ are fertile territory for rethinking our cities.

The key difference between recycling materials as opposed to urban fabric lies within the notion of space: In essence, recycling when applied to the city is not about materials but about space. Where the stuff of our everyday life form discrete objects, the existing city is a palimpsest of practices and networks framed by the material itself. In this way, cities such as Seoul have become important testing grounds to demonstrate alternatives to urban erasure. Therefore the central question that this exhibition poses is: Can our rapidly changing society find a reciprocal host within the diversity of existing urban fabrics so that both city and culture undergo positive transformation?

For location and times to the KCCUK click here »

The series of large-scale diagrams show current and future transformations in Seoul in recycling underutilized, infrastructural, and subgrade spaces into alternative public realms. A re-conceptualized figure-ground technique applies a ‘third term’ to the typically dualistic reading of our cities as public vs. private: Through the use of black as the figure of the buildings, grey as general public space, and white as each project’s area of influence, the mappings reveal how new three-dimensional public and semi-public relationships are generated out of interconnected networks rather than traditional plazas and boulevards.

Rather than merely documenting the individual form of buildings, Shin’s photographic images reveal the regulatory and social systems from which the city emerges. The Scrutable Landscape Series provides a macro view of the metropolitan regions within and around Seoul and London: The large scale prints make legible the otherwise unreadable urban aggregation, evoking a visceral response from the similarities and differences between the sibling cities. SH (Study and Habitability) takes a similar approach but focusses on underutilized sites within the hyper-density of Seoul, documenting their surreal emptiness the moment before their imminent development. From what is usually understood as the matter-of-fact organization of the city, Shin’s images constantly vacillate between the analytical and the aesthetic, compelling viewers to engage, interpret, and question the content.

Seoul
Tapio Snellman, filmmaker, artist, and architect
In this short film simply and existentially titled Seoul, fragments of time, space, and sound become a lens through which one can grasp the megacity of Seoul. Through a heightened instinctual response only available to an outside observer new to the city, Snellman captures glimpses of the quotidian and the extraordinary throughout the duration of a single day. By apprehending their subtle interactions, individuals become protagonists against the backdrop of the historical and ultra-modern urban landscape. In this way, the city becomes discernable as a continuum of events and relationships as well as natural and constructed ecologies.